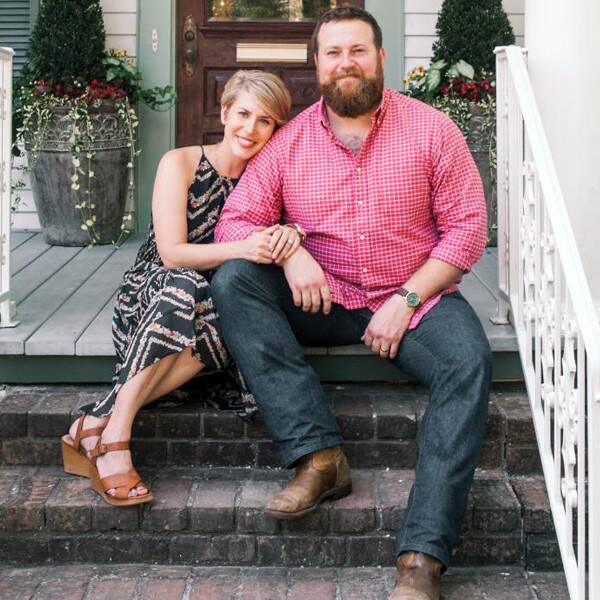 It’s been one year, nine months and 17 days since a new episode of Fixer Upper graced our TV screens.

Not that we’re keeping track, but it’s been a minute since we watched Chip Gaines gleefully proclaim the start of demo day as Joanna Gaines playfully rolled her eyes in the foreground. Or watched as the interior designer finished the room with a hand-crafted wood dining set and a dash of shiplap.

And while we’ve filled our home with stylishly rustic finds from their Hearth & Hand line for Target and begun idly planning a trip to see Magnolia Market at the Silos IRL, the Chip and Joanna-size hole in our heart remains and the October launch of their new Discovery network is still months away.

Fortunately there’s another HGTV duo with a penchant for refurbishing forgotten homes, a series, Home Town, returning tonight at 9 p.m. for season four and an entirely adorable backstory.

Erin Napier was using her graphic design degree to run a stationary company in her tiny hometown of Laurel, Miss. when she and husband Ben Napier, a minister at at Laurel First United Methodist Church, decided to pivot—teaming up with two other couples to revive Laurel Mercantile Co. downtown. Once the go-to spot for dry goods in the early part of the twentieth century, it had been shuttered and was begging for a transformation. Which they did, peddling candles, pottery and the reclaimed furniture woodworker Ben designed for their Scotsman Co. brand.

Their first step in revitalizing their small town a success, they took a giant leap, turning their skilled eyes to the historic homes in their neighborhood in desperate need of fixing. But it was their own renovated 1925 craftsman cottage that landed them a profile in Southern Weddings—and the accompanying Instagram photo that caught the eye of an HGTV exec.

“She reached out and asked if we’d ever thought about doing TV,” Erin, 34, explained to E! News in 2017, “she’d been stalking our Instagram for a while and was like, ‘I’m in love with your town, with your relationship and I just wonder if you’d ever thought about a show.’ But we never intended for this to happen.”

Actually, Ben, 36, added, they initially assumed she was just interested in a simple transaction: “Our minds went to, what if she bought stationery, and how awesome that would be. She’ll send it to all these important people that she knows.”

Instead, she asked them to shoot a pilot, he said, “and thankfully HGTV loved it and here we are.”

Because of course HGTV wanted to lock the telegenic couple down. The Gaines’ had already proven there was a market for couples as skilled at maintaining an enviable marriage as they were creating a farmhouse-style kitchen. As much as viewers wanted to see the transformations, they were also here for the duo’s harmless banter, Joanna the willing foil to any antic that camera-stealing Chip might dream up.

And the Napiers had their own kind of small town, decidedly Southern charm. After all, they’re fixin’ to revitalize their 18,000-person town one vintage rehab at a time and they’re going to do so using cost-cutting measures (yes, of course those kitchen cabinets can be repurposed) and Ben’s skilled craftsmanship. And whether you find the final results preferable to that of a certain Waco-based HGTV darling is, well, that’s all owing to your personal beliefs. No need for them to get as nervous as a long-tailed cat in a room full of rocking chairs over it.

“I think we’re like apples and oranges,” Erin responded to E! News in 2017 when asked about their differing styles, “depends on which one do you want.”

Their particular brand of sweetness began growing at Mississippi’s Jones County Community College in December 2004. A 19-year-old Erin had actually met Ben briefly at a McDonald’s seven months earlier and her crush had been building since then.

“I loved watching him from a distance and our occasional ‘hello’ exchanges on campus,” she shared on her blog. “I secretly admired him and I wanted so much to be his friend, to be important to him like some of the girls that we were mutually friends with. He was the center of attention no matter where he went, and I kept a cool distance anytime we would speak—I didn’t want him to think I cared for him one way or the other.”

That was until she realized he felt the exact same way.

“The first time I met Erin was in the cafeteria at Jones County Community College,” Ben told E! News, their origin story now a well-worn narrative for the couple, a decade-and-a-half into their partnership. “I was talking to a group of girls and they said, wow, I love that girl’s style. I turned around and Erin had this really short pixie cut and she was wearing these loose-fitting jeans and it was like, oh man, she was so cool. From that moment on I was hooked.”

Fate, or rather the yearbook committee that tasked designer Erin with putting together a feature on the campus’ 10 most interesting residents, including Ben, brought them together and it took them all of a week to realize they were in love. Really, six days, to be precise.

“I hugged her for the first time on a Tuesday, at the yearbook meeting, and we spent every minute that we could together for the next six days,” recounted Ben. “Then I told her that I loved her and that I was going to marry her one day.”

He made good on that vow, proposing in September 2007. By that time the two had transferred to The University of Mississippi together and Ben had crafted an elaborate plan for the weekend of his birthday.

“Ben asked me to come with him to Square Books so he could get a book for a class,” she shared on her blog. While Ben went upstairs, purportedly to track down what he needed, she browsed with her roommates downstairs where one one of her pals handed her a handmade leather-bound book, instructing her to read. “It was the story of an unlikely couple who met in college and fell in love fast. I had no idea it was about us at first. Then the couple began sounding a lot like us. Then it was us. And I was shaking all over, anticipating what was going to happen. The last page said, “Come upstairs for the rest of the story.”

When she reached Ben at the balcony, they both dissolved into tears: “So he leaned down to my ear and whispered this: ‘You know how much I love you?…And you know I will always take care of you…I talked to mammaw (my grandmother)… and in the words of James Rasberry, ‘I’ve got something for you.’ Then he got down on one knee and said: ‘Will you marry me?’ And I couldn’t say yes enough or cry enough. It was the most shocking and beautiful moment of my life.”

Married the following November, they settled first in a rented downtown loft and then, as her stationary company Lucky Luxe grew, the historic charmer that Erin first began eyeing as a middle schooler.

These days they’re still rambling around the thoughtfully decorated cottage (a mix of built-in cabinetry, vintage photos, mismatched furniture and the perfect all-white kitchen) with their 2-year-old daughter Helen (named for Erin’s grandmother) and their Great Pyrenees rescues Chevy and Baker.

They kick off mornings with coffee and a fried egg (for Ben) and cereal and a Coke Zero (for Erin) and finish each evening with story time and an episode or two of television (Blue Bloods is a fave) “to make our brains stop,” as Erin put it to HGTV. In between they go to their day job—visiting any one of the handful of houses they’re redoing—and it just so happens to be captured by cameras. “It doesn’t feel like a big thing,” Ben reasoned to House Beautiful. “We get up, we work with our coworkers, and we go home.”

Other than the fact that they’re occasionally approached by someone in Laurel (Ben relishes each interaction; self-described introvert Erin can often be found hiding in one of their vintage cars), everything is pretty much the same right down to their sweet anniversary tradition.

Their love of reading a constant through line of their relationship, Ben gifts his wife a book each year, sharing his collection of thoughts on the best thing that happened each month. “Every year, the cover is related to whatever the traditional anniversary gift is,” Erin told House Beautiful of her tomes covered in paper, cotton and floral fabric.

And with practices like that (and their tendency to gift each other books with handwritten notes etched inside the front cover), the college sweethearts have experienced precisely none of the marriage growing pains that others tend to complain about.

“Just belonging to Ben and sharing his last name makes my heart feel fluttery. How many people marry the biggest crush they ever had?” she marveled in that 2014 Southern Weddings piece. “Marriage is our comfort zone and support system; it’s as natural as breathing and just as necessary for making my way through life with all its good and hard times. People say, ‘Marriage is hard and it takes hard work.’ That hasn’t been my experience. I think that if you marry the right person for you, the disagreements won’t feel like work.”

Or, as she puts it to E! News, “I feel like I’m not good at a lot, but what we are good at is our relationship.”

Their obvious love translates to the screen, with their 2017 premiere notching in as the second-highest rated of any in the network’s history and people flocking to Laurel—a town some two hours north of New Orleans and four-and-a-half hours south of Memphis—to peep the revitalization, the antique shops, the Cajun restaurants, the paved brick streets, for themselves.

Which, frankly, still leaves Erin flabbergasted, the artist having assumed the show wouldn’t gain all that much traction. “Why would it be possible to make a TV show in a town like Laurel, Mississippi?” she reasoned to House Beautiful. “We love it very much, but that doesn’t mean everyone else would. So we had fun and never had any expectations.”

And now they’re just riding the wave both into season 4 of Home Town and their 2021 six-episode series, Home Town Takeover, that has them holding a nationwide contest to find another quaint community (must have a population of 40,000 or fewer) they can lend their magic touch to.

That this is their life now never fails to amaze. “We know Laurel’s success is thanks to the TV show,” Erin told E! News. “It’s not me and Ben, we don’t take any credit for any of it.”

Perhaps, though, maybe they should claim just a little.