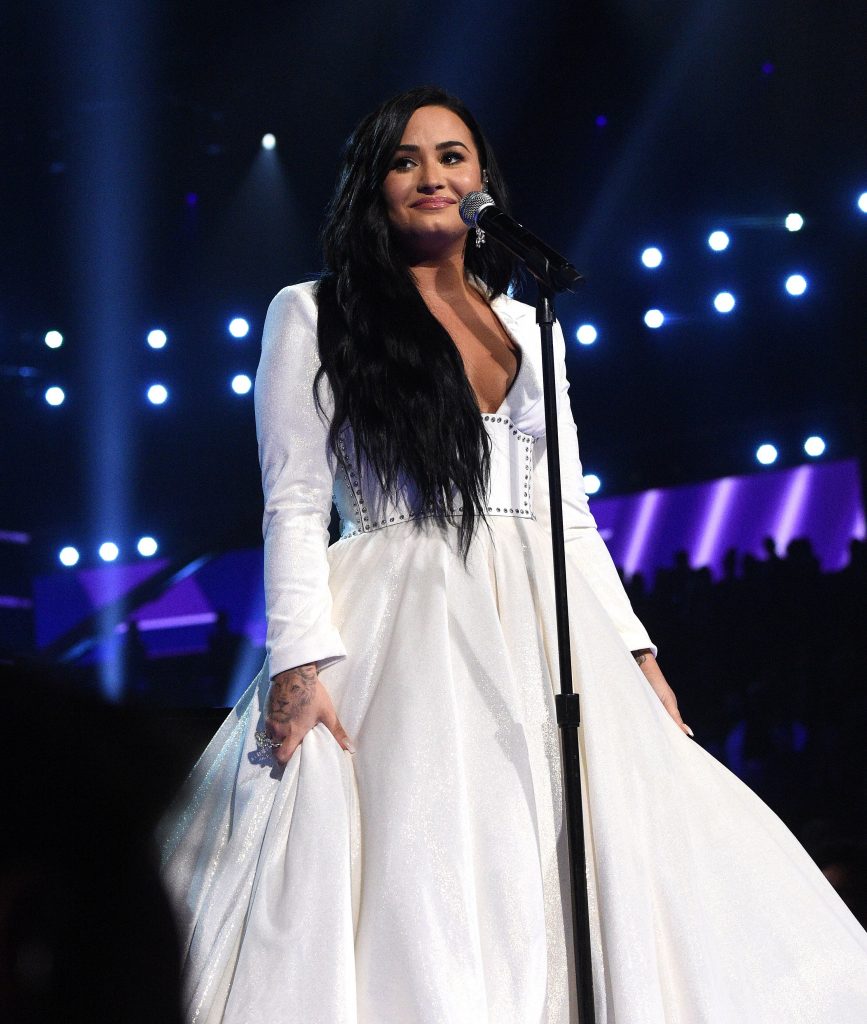 
Demi Lovato made a triumphant return to the stage at the Grammy Awards, debuting her new song “Anyone.” Sunday marked the 27-year-old’s first live performance since her 2018 hospitalization. Greta Gerwig introduced the singer, noting Lovato wrote the song “four days before an incident that almost took her life.”

“Tonight, she’s here to share her voice with all those who are battling the darkness in their lives so they might be reminded there is light on the other side,” the Little Women director said.

Lovato, dressed in a white flowing gown, started to sing but was overcome with emotion after the first line.

“I tried to talk to my piano,” she sang, before turning away.

Lovato stopped to regain her composure as the star-studded crowd began to cheer. When she stepped back up to the microphone, tears falling down her face, Lovato delivered a powerhouse performance.

It’s easy to see why Lovato needed a moment as the lyrics are haunting considering everything that followed shortly after the song was written.

“Anyone, please send me anyone / Lord, is there anyone? / I need someone,” the Disney alum sang. “I used to crave the world’s attention / I think I cried too many times / I just need some more affection / Anything to get me by.”

Lovato (rightfully) received a standing ovation after her performance.

“Anyone” was recorded four days before Lovato accidentally overdosed at her Hollywood Hills home in July 2018. In an interview with Zane Lowe for Apple Music’s Beats 1, the singer said she hears “a cry for help” when she listens to the lyrics.

“And you kind of listen back to it and you kind of think, ‘How did nobody listen to this song and think, ‘Let’s help this girl?'” she explained.

“I was recording it in a state of mind where I felt like I was OK, but clearly I wasn’t,” she continued. “I even listen back to it and I’m like, ‘Gosh, I wish I could go back in time and help that version of myself.'”

Lovato first listened back to the song in the hospital, where she stayed for nearly two weeks. She remembered thinking, “If there’s ever a moment where I get to come back from this, I want to sing this song.”

Lovato said she was nervous leading up to her big Grammys performance.

“It’s taken me a long time to be able to get even this far, which is performing a song that’s so vulnerable to me on a stage in front of all of my peers and coworkers and even people that I look up to,” she told Lowe. “That’s kind of nerve-racking to think about. But at the same time, I’m grateful that I have this opportunity to sit here… and tell a little bit of my story. As time goes on I think I’m gonna tell more and more about it. With the next song that I have coming out, I think I tell more of the story. With this one, it just kind of tells you a little bit about where I was right before and right afterwards.”

Lovato found solace in church following her overdose, which is interesting considering her references to God in the new ballad. (I feel stupid when I pray / Why the f*** am I praying anyway? / If nobody’s listening)

The singer told Lowe she has to “be aware” of Monday’s potential crash that might follow Sunday’s high.

Lovato’s return to the spotlight will continue on Feb. 2 as she’s slated to perform the national anthem at Super Bowl LIV.