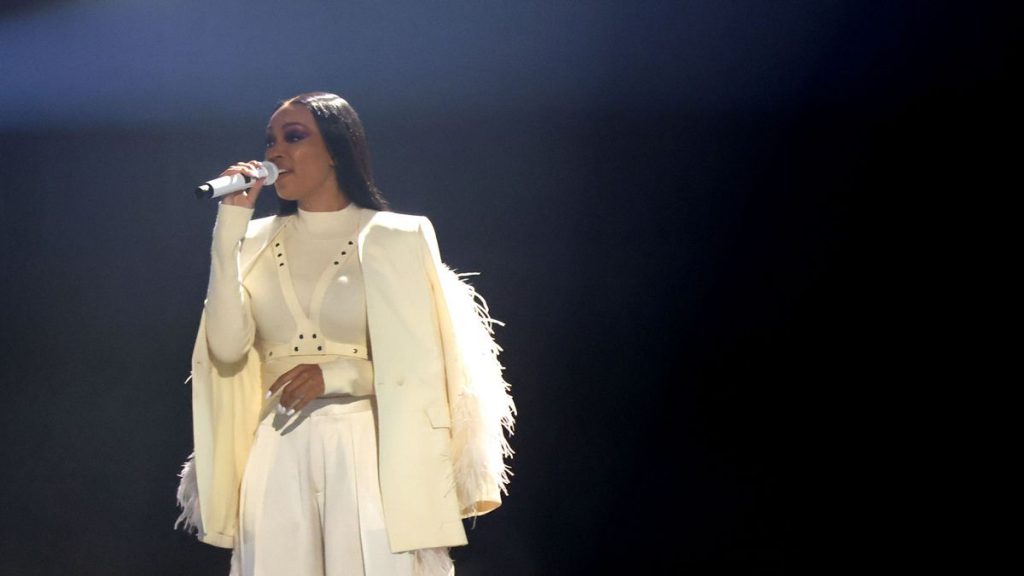 The best things in life are those that come when you least expect them, is a cliché moto that genre-bending musician Monica can strongly attest to. R&B-soul icon Monica was tirelessly working in the studio alongside Grammy Award-winning artist Brandi Carlile on a project called, “Pray” for Jimmie Allen when she heard heaven-like harmonies in the studio beside her.

The mesmerizing sound was coming from the multi-platinum country band Little Big Town and the creative within her instantly had a gut feeling that their vocals would bring “Pray” to new heights. Backstage at the 2022 CMT Music Award, the vocalist shared that Allen had the very same idea right from the start – proving that great minds think alike.

“He never mentioned to me that he even had the idea. What I think it speaks to is sometimes God aligns things without our help,” Monica pointed out to CMT. “It was put into motion without any help. When Jimmie sent me the song, he and I had never met. So, for that to happen in the studio and it already be a thought of his, it just says that this song’s exactly where it’s supposed to be.”

It wasn’t long until the faith-centric collaboration featuring Little Big Town and Monica appeared on Allen’s 2020 record, “Bettie James.” The group of musicians brought the anthem to the CMT Stage to deliver not just a powerful performance, but to call for unity. Following dress rehearsal, “The Boy Is Mine” singer took a second to explain the song’s weight and why the underlining message is needed now more than ever.

“For the two of us [Jimmie Allen] to have the support of Little Big Town and for them to say this message is needed. We all need to come together and acknowledge that we all bleed the same, we all love the same, and we’re all asking one God to cover us. We all go through what this world is going through right now,” she said while referring to the inequality, the Russia-Ukraine war, and the hate crimes today. “For me, it says a lot… we don’t have to even speak the words, we’re singing it. We’re telling you exactly what we feel through the song.”

The award-winning performer continued to mention that “Pray” was the perfect song to make her country debut with, as she is returning back to her roots and singing what she believes in.

“It made it really special for me because my parents are Methodist ministers. Some of my secular music, they aren’t as fond of because I say things that will make my mom’s neck snap back,” she shared with a laugh. “But in this moment, she sees exactly who she raised and what she taught us. The faith that she instilled is represented strongly in the song,” she added.

It’s fearless females like Mickey Guyton and leaders like Jimmie Allen who have created a safe space within the honky tonk genre, that gave Monica the courage to shift from R&B to country. When Monica stepped into the music scene in 1994 and signed with Rowdy Records at just 12-years-old, she revealed that there was little-to-no representation.

“You didn’t see black women singing country music as much, there was no representation…but they didn’t have the platform we now have,” she clarified. “You look at Mickey Guyton, I absolutely love her. I love who she stands for, I love how she represents herself, and of course, her voice is magnificent. But, to also read sometimes the hardships that she faces… I’m definitely a frontline soldier in saying that we all should be able to be in this space. It should be a complete welcome for each of us. Not just because we should, or we feel like it’s old, but because it’s earned. We work just as hard, we love just as hard, and we sacrifice just as much. For me to be able to do it after being told for years that R&B singers just don’t – it means even more,” she stressed.

Monica told CMT that she kept her country music dreams hush-hush for an extended period of time until fellow musicians like Carlile, Miranda Lambert, and other empowering women encouraged her to explore other areas of her artistry despite naysayers. While placing outside opinions on the back-burner, Monica called in Carlile to cultivate her forthcoming country record, “Open Roads.”

“I kept this dream really to myself, and no one knew but my parents,” she revealed. “For me to say it and someone like Brandi be so open to it, want to be a part of it, be there cutting my vocals, bringing in Natalie Hemby, and Miranda Lambert. All these people that I admire to be so ready to work with me – it was the push I needed.”

The crossover artist said she played with the idea, but always thought it would be “safer” to just stay and make music where she was comfortable.

“I’m stepping completely out of my comfort zone. I’m no longer singing country in the shower. I’m singing it for the world,” she said with pride. “I’m doing what I tell my children to do all the time to remain fearless, to break barriers, to stand for something. I know that I’ll stand for something standing in country.”

Monica’s highly anticipated country collection is set to drop later this year, and she warned CMT to buckle up because “Open Roads” will be a “legendary” project.

“The name of the album is “Open Roads.” It’s executive produced by Brandi Carlile and myself. We are going to make sure we blow your minds, because I am not taking this lightly. This is my first, so I feel like the same 12-year-old girl that brought you my very first R&B album,” she said full of excitement. “I have separated myself completely from that world to do what needs to be done over here. I sometimes sleep right at the studio while they are playing live instruments around me, whatever needs to be done. This is serious for me, I take it seriously. So, I definitely am giving it 3000 myself and making sure that it is the type of record that could be looked at as “legendary,” she concluded.

Until Monica releases “Open Roads,” country music fans can tune into the CMT Music Awards Extended Cut tonight, April 15, on CMT to watch her chilling performance of “Pray” with Allen and Little Big Town. The must-watch version will consist of 30 additional minutes and will have extra never-before-seen content.