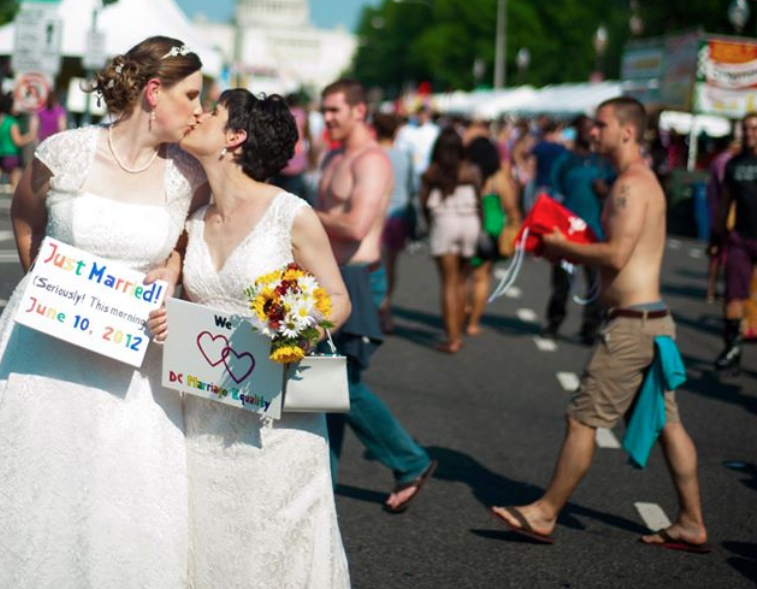 Couple who met as ‘Jeopardy’ competitors share their love story

When Emily and Stacy Cloyd met for the first time, back in 2010, they discovered they had much in common: Both had gone to school at the University of Michigan in Ann Arbor and were about to both reside in Washington, D.C. But the most remarkable thing about their first meeting was that it happened while both were auditioning to be contestants on Jeopardy! — and that it led not only to the two women facing off on an episode the TV game show, but falling in love, and getting married.

Now, a decade after their paths first crossed, and nearly eight years since they were married, the Cloyds are reflecting on the role that America’s favorite game show played in their love story, captivating the attention of people across the country through a series of social media posts.

It was a photo of Emily and Jeopardy! host Alex Trebek that sparked the initial attention, when Emily took to Twitter to share the impact that the show had on her life — referring to it as her “#JEffect” story. But little did her followers know that her long Twitter thread, explaining the testing and auditioning process for the show, would turn into a narrative about an even more important relationship in her life.

At the in-person audition, the other J! hopefuls were just as nervous / excited as I was, the test game gave me an idea of what it was like to use the buzzer, and the J! contestant coordinators made everyone feel like they had a personal cheerleading section.

When the coordinators asked who had come the furthest, one woman said she’d come from Ann Arbor – she’d just graduated from @UMichLaw (Go Blue!) and was planning to move to DC after the bar exam to work at @BreadfortheCity’s legal clinic.

In it, she discussed the “other J! hopefuls,” not naming anybody in particular, and noting that one woman announced her alma mater, and plans to move to D.C., during the first in-person audition. Still, the coincidences in their stories didn’t captivate much of Emily’s attention until she was called to be on the show many months later. At that point, after arriving in California for the taping, she saw a familiar person who she later came to know as Stacy.

On the morning of the taping, my cousin dropped me off at Sony Pictures Studios. I looked around at my fellow contestants (J! tapes 5 shows in a single day, so there were 15 of us there) and recognized the woman from the audition.

She didn’t recognize me. Or maybe she did, once I said I’d briefly met her at the audition. I think that she was being nice. She introduced herself as Stacy.

Stacy tells Yahoo Lifestyle that she was “pretty busy” during the time between the audition and the taping, as she was moving halfway across the country. However, when Emily re-introduced herself it “kind of came back to me.”

“We were chatting during the day of taping, we had lunch together,” Stacy recalls.

Ultimately, both of the women were chosen to play the same game and became competitors.

And then my name was drawn. I’d be playing against Manny Maldonado III, who had just vanquished 4-time champion Regina Robbins, and Stacy.

I bet $350 on Final Jeopardy! I figured if I couldn’t win or come in second, I could at least make a nod to @350 and the importance of acting on #ClimateChange.

Final Jeopardy! was a triple stumper. I ended the game with $50. pic.twitter.com/bZgsyn2eIF

Stacy ended up winning the game, while Emily ended up with $50. Still, the women wound up making plans to have a joint watch party in D.C., which meant that the January taping wouldn’t be the last that they’d see of each other.

Over the next couple of months, Stacy and I were in occasional contact as things came together for the viewing party. Although we’d taped in mid-January, the episode didn’t actually air until the end of March.

Stacy explains to Yahoo Lifestyle that the two were Facebook friends, which allowed them to stay in touch. But it wasn’t until a trip to go strawberry picking that she realized she might have feelings for Emily.

“I just sort of had this sense that I was really enjoying her company,” Stacy recalls. “I thought, yeah, I’m not done hanging out with her yet. I wanna spend more time with her. So we just sort of gradually spent more time together.”

Two years after the taping, Emily and Stacy were engaged. And they didn’t neglect to invite the man that played a part in bringing them together.

A little more than two years after our episode aired, we went to a taping of Celebrity Jeopardy! at DAR Constitution Hall. We hand delivered a note for Alex Trebek to one of the J! staff members. pic.twitter.com/4r753rzU28

And a week or so later, we got the response card back.

Alex Trebek wasn’t going to come to our wedding, but he still sent us his best. pic.twitter.com/WMT3zJDa8f

And although Trebek didn’t attend the nuptials, the couple still shared their thanks for him on Twitter with the hashtag #ThankYouAlex.

“Jeopardy! is a nice part of our story, but it’s not the focal point of our life at this point,” Stacy says.

Still, she understands why that snippet of their history has attracted the attention of so many people.

Plus, Stacy points out, she and Emily aren’t the only ones to have found love on the show. In fact, there are a number of other Jeopardy players who have found their life-long partners through a similar process.

“It might just be the sheer longevity of the show. You get enough people together and eventually some of them fall in love,” Stacy surmises. “It’s a group of people who have something in common and who’ve shared an enjoyable and exciting experience. And so, when the combination just happens to be right, sometimes, I guess, it leads to romance.”