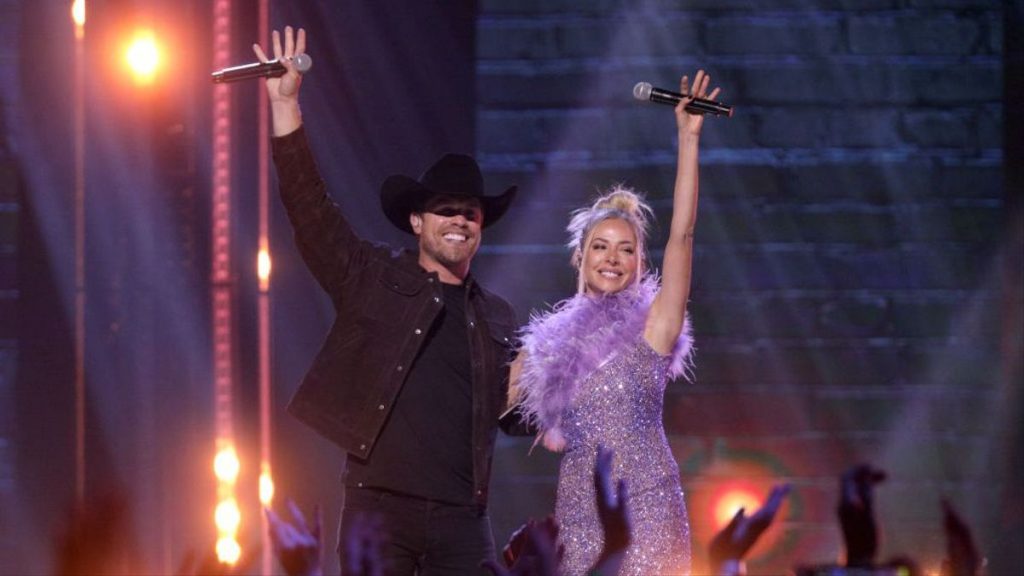 Budding songstress Tenille Arts received two nominations for the reminiscent track, “Back Then, Right Now.” Swindell’s duet “Never Say Never” with Lainey Wilson is in the running for Video of the Year and Collaborative Video of the Year, Parmalee’s “Take My Name” scored a spot in Group/Duo Video of the Year. Meanwhile, Porter received her first-ever nomination for her collaboration with Dustin Lynch with the chart-topping track, “Thinking ’Bout You.”

Despite the friendly rivalry, the group of musicians all agreed that they are looking forward to celebrating country music and each other’s victories.

“I love that about this whole big family,” shared Swindell about the tight-knit genre. “I just feel like we’re all pulling for each other, and that’s how it should be. This is a night for country music, and everybody’s that’s been a part of it. I think that’s the coolest thing to me.”

The group of musicians voiced that the country community has spent too much time apart due to the global health crisis. Therefore, they are eager to dive back into the scene and are excited to reunite with frequent collaborators, rub elbows with notable Nashville names, and relish in their success.

“This is my first big award show and first carpet. I’m probably going to be fangirling the whole time. It’s just cool to be included with these people that I really have looked up to for so many years. I’m going to take all the pictures and just soak it in,” revealed Porter full of excitement. “We’re excited to get out there and party with all our friends, fellow artists, and everybody. It’s going to be a good time,” gushed the lead vocalist of Parmalee.

Swindell did not fail to mention that their nominations hold more weight this year, as several of the music videos were produced in the midst of the pandemic. In order to keep themselves and their teams safe, they were forced to think outside the box.

“I find it fascinating how much the industry has changed as a result of us having all these precautions and all these different rules that came about during quarantine and COVID,” he said. “People just had to be super creative. I think you had to kind of find ways to get around it and still make the art that you wanted to make. I think that it is important to learn how to get through those things in our own way,” he added.

Porter chimed in to reveal behind-the-scenes secrets about the “Thinking ’Bout You” music video. The singer-songwriter pointed out that she had to adapt to the times with Lynch to bring their vision to life.

“Justin Nolan Key directed it [the music video], and that was maybe only the third time that I had really met Dustin. I really got to meet him and know him as a friend,” she declared. “We shot in this very cool warehouse, and the whole thing was different sets within the building. We were together the whole day with a car and a lot of green screen stuff – it just turned out really cool.”

When the world started to open back up, and the music industry began to receive a taste of normalcy – Arts called in critically acclaimed director Kristen Barlowe to elevate her up-tempo track “Back Then, Right Now.” The party-like clip scored her two nominations for Female Video of the Year and Breakthrough Video of the Year.

“It was really cool to work with another female on a video because I had never done that. She’s just a legend. We actually went out to Shelbyville, TN. And the whole concept of the video was like everybody coming out of their homes and getting back to the things they love,” she described. “It ends up being this big mains street dance party. I went in and worked with a dancer, and she taught me this little dance to go with it. Then she brought out all of her friends to be in the video. We just tried to make it really inclusive and have a bunch of different people represented.”

Arts continued to open up about her primary motive behind the music video.

“We had every type of person you can imagine. We were all just getting back to the things that we love, and I had so much fun filming this video,” shared the platinum artist. “We got to drive around in an old car and then have our big dance party at the end. It is my favorite video I’ve ever shot. So, to be nominated this year is super fun, and I’m so excited for the awards.”

Arts penned the feel-good anthem that pushes for inclusivity alongside Porter, Dave Pittenger, and Parker Welling. Arts pointed out why “Back Then, Right Now” holds a special place in her heart and why the nomination serves as a full-circle moment.

“I’ve always wanted to get my Pontiac into a song because I drove my little yellow Pontiac from Weyburn, Saskatchewan, down to Nashville when I first moved here,” she recalled. “I’ve always wanted to have it in a song. It’s just a flashback to driving around in my hometown with my friends. It just makes me smile every time. I still have that little car, and it made its music video debut as well,” she concluded.

While the nominees cross their fingers in hopes their names will be called, several A-listers will dominate the stage with never-before-seen performances. In fact, Swindell is set to join forces with Wilson to perform the smash hit “Never Say Never” for the first time live. The 2022 CMT Music Awards will air live from Nashville at 8 p.m. (ET) Monday on CBS.