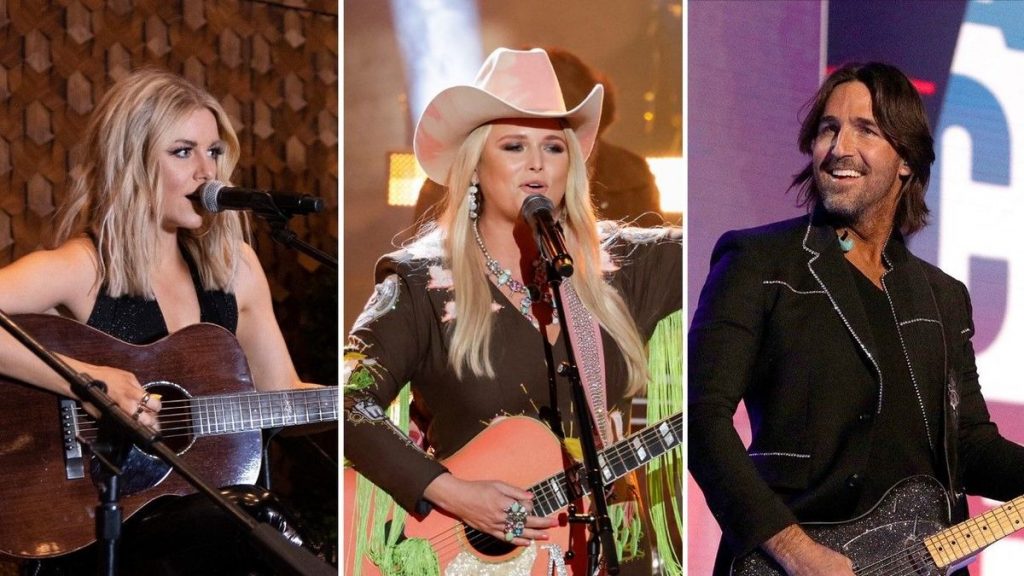 It’s a Friday of country star new music releases this week with songs and albums out from artists including Chris Janson with Eric Church, Miranda Lambert, Darius Rucker, Lindsay Ell, Matt Stell, Brett Eldredge, Jake Owen and more. Check out our recaps of some of our favorites as well as the CMT Roundup playlist at the bottom. Happy listening!

Jake Owen, “1×1”: Written by Luke Laird, Hillary Lindsey, and Josh Miller and produced by Joey Moi, “1×1” is a sentimental reflection of Owen’s current place in life as the father of two growing daughters.

“One by one, year after year, song by song, I’m constantly trying to improve myself and my career,” the singer said on social media. “This song, aptly titled ’1×1,’ is very fitting for where I am in my life right now. It’s one of the best songs I’ve been a part of recording and something I’m really proud of. One by one, day by day, step by step, I’m working on a better me.”

Lyrics include: Still hard to beliеve what you did to me| Now look what you’ve done| I’m picking you daisies, and we’re naming them babies| And counting these blessings one by one

Miranda Lambert, “Tourist”: Lambert wrote “Tourist” with frequent collaborators Luke Dick and Natalie Hemby, and the song set the theme for her new album “Palomino,” which is out today.

“Since we couldn’t travel at the time, we decided to go on a journey through songs,” Lambert said, explaining that “Tourist” was written during the peak of the pandemic. “I hope y’all are ready to travel with us wandering spirits and meet some cool characters with great stories.”

“Tourist” rings autobiographical for Lambert and feels like her sweet spot where authentic storytelling meets a rolling melody with minimal production to keep the spotlight on her voice.

Lindsay Ell, “Right On Time”: Ell says her new straight-up bop is for anyone who has ever felt like they’ve fallen behind in life.

“Know that everything has a way of falling into place when it should,” she said on Instagram. “You can never be late to the party in your own life!”

Ell wrote the genre-busting “Right On Time” with Jordan Schmidt and Geoffrey Warburton. With plenty of loops, pop production, and syncopation, “Right On Time” puts a light-hearted musical spin on the sensitive topic outlined in the lyrics.

Lyrics include: I got a friend who just got married, again| I don’t know what the hell that girl does| I can’t even find a plus one| My momma says I’m just too picky| I guess, but isn’t that better than selling life short| For someone that you’re settling for?

LANCO, “Low Class Lovers”: Multi-platinum group LANCO officially dropped their lead single “Low Class Lovers” from their highly anticipated project. The country-rock hit was penned by frontman Brandon Lancaster and produced by GRAMMY-winner Jay Joyce during the height of the pandemic. The singer-songwriter pulled from real-life experiences to pen the poetic track. While icon Billy Joel may not be in the country realm – you hear touches of his classic rock storytelling approach within “Low Class Lovers,” as LANCO uses imagery to explain experiences that brought him happiness. The men behind LANCO hope fans “use their own imaginations” to interpret the lyrics.

“Baby you’re top chef |I’ll drink from the well |Cuz it all taste the same to me | She’s dancin’ on tape |I’m wishin’ I was able to give her the smiley face |She says baby, baby hold me closer tonight |Maybe they’ll what their money can’t buy |From low class lovers livin’ the high life,” Lancaster sings in the bridge.

“We’ve lived a lot of life since the release of our debut album ‘Hallelujah Nights,’” gushed the singer. “Our highs, lows, and many lessons learned over these last few years were the inspiration for this new chapter that feels more authentic to us than ever before.”

Mitchell Tenpenny, “Elephant In The Room”: Country music breakout star Mitchell Tenpenny has wowed country music fans once again, as he brought a whole new sound to the table with his electrifying new single, “Elephant In The Room” with Teddy Swims. The techno-like dance track includes impressive drum solos and a catchy chorus that will leave you dancing in your seat.

“I connected with Teddy a few years ago over DMs on Instagram to tell him how refreshing it was to hear a voice like his. When we met, we became instant friends and began writing together,” shared the fast-rising country artist. “’Elephant in the Room’ is about that enate thing in us as humans when we can feel it when someone is watching us. This song is a love story about two people who have this kind of chemistry and energy happening from across the room. And everyone else can feel it too because it’s so powerful. I hope the fans will enjoy the music video for the song; it’s just insanely fun,” he concluded about the club-ready banger.

“You got your cars without drivers, traffic’s getting worse | We’re racin’ off to space, just to get away from Earth | 3G, 4G, 5G, getting even further from the OG | Granny’s eatin’ gummies, Mama’s online | All I know for sure is we’ve all lost our minds | A little bit funny, a lotta bit strange |But at the end of the day | It’s the same beer, different problem,” he sings.

The upbeat jam follows his No.1 hit “Beers And Sunshine” and recent single, “My Masterpiece.”

“The line ‘a little bit funny, a lotta bit strange’ really sums up the message of this song and all of the things that make you shake your head these days,” Rucker shared. “We had so much fun as songwriters coming up with all of those examples and putting a lighthearted spin on the craziness of the world.”

Rucker is actively working on his forthcoming solo album, which will mark his first solo collection since his fan-favorite 2017 project, “When Was the Last Time.” While penning the highly anticipated LP, the country phenomenon will be gracing legendary stages nationwide on his Darius Rucker Live Tour. The blend of Rucker’s distinctive vocals and the toe-tapping chorus is destined to make “Same Beer Different Problem” the song of the summer.

Listen to the full Roundup Playlist: