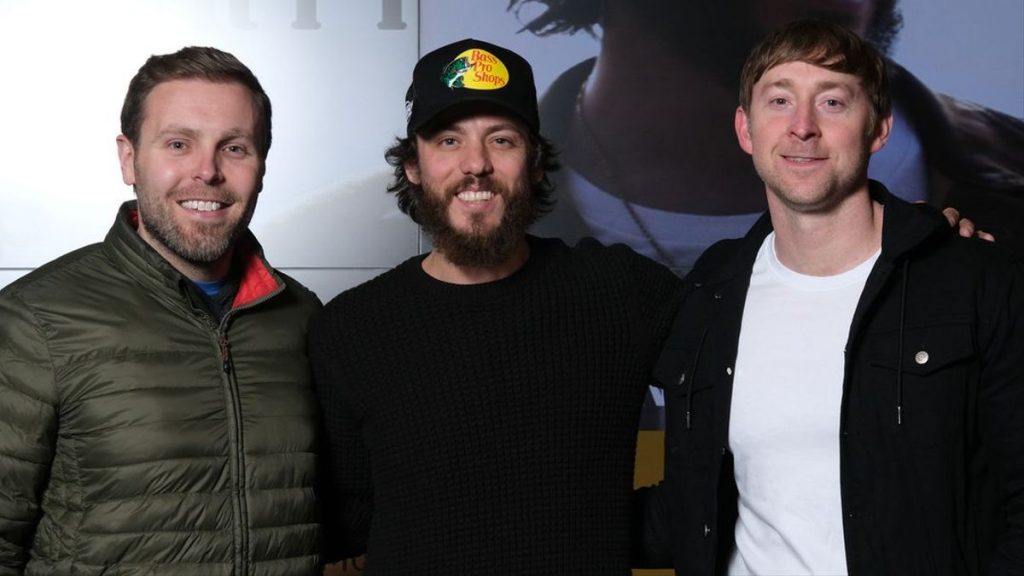 It was a grateful Chris Janson who stood on stage at the BMI building in Nashville Tuesday afternoon (Jan. 21) to accept the praise and plaques for his hit single, “Good Vibes.”

Making the chart achievement even more special was the fact that besides recording the song, Janson also published it, co-wrote it with Zach Crowell and Ashley Gorley, and co-produced it with Crowell.

Crowell (pictured above, left) and Gorley (right) were both on hand to share in the applause.

While the three writers and various Music Row executives and staff members posed for pictures, the sizable crowd of guests who’d braved the chilly afternoon winds grazed at the Mexican food table or lingered at the wine and beer bar. They were served by crisply uniformed waiters who circulated among the waist-high tables keeping things neat.

The food table offered a constantly replenished tray of large round cookies, each decorated like a vinyl record with “Good Vibes” inscribed on the label.

The two major performance rights societies — BMI and ASCAP — sponsored the celebration. Janson is a BMI member; Crowell and Gorley are affiliated with ASCAP.

BMI’s David Preston hosted the proceedings, first giving a rundown on Janson’s rise to prominence and then introducing the other speakers.

After he called the party to order, Preston presented a video of congratulatory messages from some of Janson’s friends and fellow artists, among them Kid Rock, Nashville actor and recording artist Charles Esten, songwriter Dallas Davidson and members of the Cadillac Three.

“His life hasn’t always been a fairy tale,” Preston said of Janson. He recalled first meeting him when he was “busting his ass at Tootsie’s Orchid Lounge” in downtown Nashville. Preston said he was so impressed by Janson’s energetic music that he signed him immediately. “That was 15 years ago,” he added, indicating that some of the intervening years had been rough ones.

Janson recorded for two other major labels before moving to Warner Music Nashville, his current home, in 2015. It was there that he scored his first two big hits, “Buy Me a Boat” and “Fix a Drink.” He’s also reached the Top 10 at radio with “Drunk Girl,” with the video later winning an ACM Award.

ASCAP’s Mike Sistad spoke on behalf of Crowell and Gorley, noting that the former had co-written ASCAP’s 2018 country song of the year, “Body Like a Back Road,” and that the latter had for the seventh time been named the PRO’s country songwriter of the year.

Sistad said that “Good Vibes” was Crowell’s 11th No. 1 as a writer and his seventh as a producer. He added that Crowell would soon be getting his eighth No. 1 producer award for Dustin Lynch’s “Ridin’ Roads.”

“Good Vibes,” Sistad continued, is Gorley’s 45th No. 1 and that his 46th and 47th ones are in the chute to be officially celebrated.

John Esposito, Warner Music Nashville’s CEO, announced that “Good Vibes” has been certified gold and predicted, “He will be entertainer of the year” (although he did not specify whether it would be from the Academy of Country Music, the Country Music Association or other awarding body.)

Esposito also lauded Janson for his performance in the 2019 Macy’s Thanksgiving Day Parade.

“This has by far been my favorite No. 1 party,” Janson beamed. He spent the next 15 minutes or so citing and thanking all those who had been supportive of or instrumental in bringing him to this point in his career, including his wife, his in-laws and his “doctor from Michigan,” all of whom stood in the crowd to cheer him on.