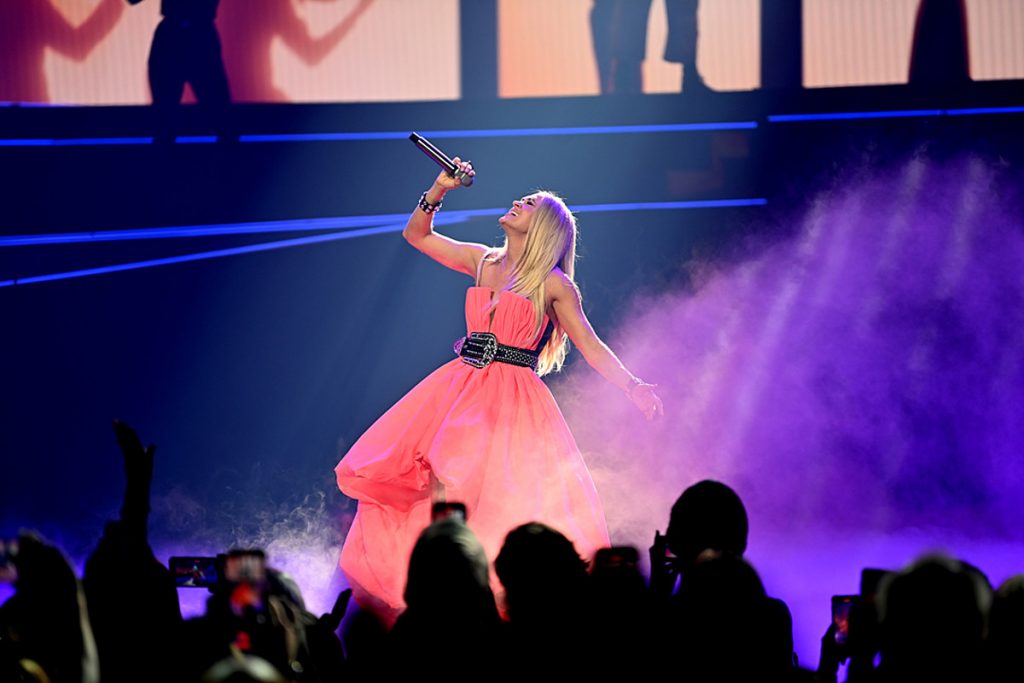 
Carrie Underwood approaches her residency at the Resorts World Theatre in Las Vegas like a championship-caliber football team might approach the Super Bowl. The tools for greatness already existed before Wednesday night’s (Dec. 1) debut; she wouldn’t be there if they didn’t. But a plan lacking a brilliant concept, relentless preparation, focused teamwork and attention to every dazzling detail would fall short of transformative.

And Underwood’s show is transformative.

As she waved from atop a ledge, built into a water wall, which drops back into the expansive stage it rose from prior to her encore, she smiled the smile of a champion and fought to catch her breath. Her band was soaking wet at this point, if not from the sweat of playing, then from the water cascading down on and around them. “Something in the Water” has long been a tour highlight for the three-time Entertainer of the Year, but in Vegas, it’s purified, amplified and magnified to leave every hair on your body standing at attention.

How Team Underwood would build upon the visually spectacular Cry Pretty 360 Tour is central to the anticipation of this show. Throughout Reflection: The Las Vegas Residency, state of the art video screens and a best-in-class audio system are sure to reinvent her as a live performer for those who’ve only attended arena or festival shows. But this show is more than just a wonder of technology.

A team of dancing rhythmic gymnasts first join Underwood and her eight-piece band during “Drinking Alone,” but they elevate the show with a hoops exposition during “Blown Away,” the bookend for her mid-show death trilogy. Pairs weave arms and legs between floor-to-ceiling tapestries and ascend 20 to 30 feet into the air for a synchronized performance equal parts beautiful and harrowing. Every time their toes touch the stage, the bar raises another notch, but none of it distracts from the vocal performance. The music is never lost.

After what looked like early nerves, Underwood found her breath at the end of “Two Black Cadillacs,” holding a note in a way fans selfishly expect her to do on repeat. The rigor of her setlist should not go unappreciated — rangy ballads are followed by more that require even higher, longer runs. There’s barely a break for Underwood, though “All-American Girl” may have qualified on this night, as she invited a woman who was celebrating her bachelorette party to the stage to sing along with her. Regina from Las Vegas needed no further encouragement.

On the residency’s opening night, “Cowboy Cassanova” began a set that included 21 song titles. Underwood’s entrance is special, but by the time she nonchalantly sets a Jeep on fire to finish “Before He Cheats,” the quieter early moments of the show are long forgotten. Most country concerts are built like a good mix tape: Early energy gives way to mid-show ballads and conversation before a rousing rush of hits, covers and pyro, if available. Reflection builds more like the Mountain Climber game on The Price Is Right. Sure, “Jesus Take the Wheel” is a chance to sit down, but then she adds a bit of “How Great Thou Art” to close and you’re standing in rapture once again. Only the beer vendor left disappointed, as there’s just not a chance you’ll want to scoot away for a refill.

Several outfit changes allow room for Underwood’s well-rehearsed band to show off some more. A cover of Led Zeppelin’s “Rock and Roll” is an unexpected highlight of this show, which is scheduled through December with dates in March, April and now May 2022. Drummer Elizabeth Chan could change her name to Joan Bonham and no one would object.

When Underwood returned in a flowing silver skirt and jacket to begin the final few songs, it felt like the kind of fourth quarter surge appropriate for a singer as athletic as she is. In tangible ways, everything the country star has done prior to now — her dramatic songwriting, the dynamic touring rigs, her dedication to exercise and fitness — was for this moment.

The Resorts World Theatre is part of Resorts World Las Vegas, a newly-opened Hilton partnership on the Las Vegas strip. Katy Perry, Celine Dion and Luke Bryan also have residencies scheduled into 2022, but during a tour of the property prior to the show, executives assured Taste of Country and select media that even more experiences will be announced soon.

Taste of Country was brought to witness Reflection: The Las Vegas Residency as a guest of Resorts World Las Vegas.