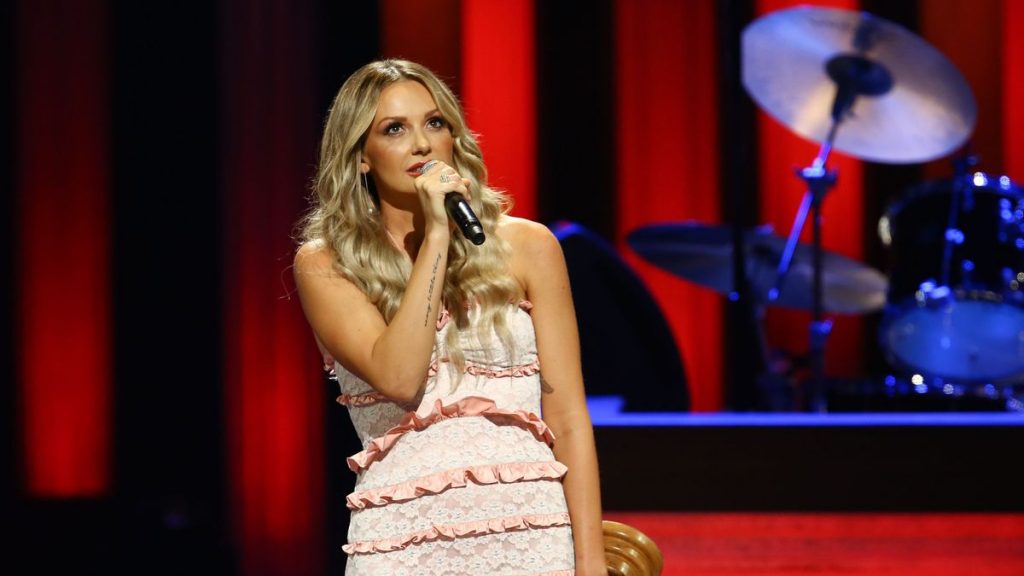 Carly Pearce previously had a full-circle moment at the Grand Ole Opry.

In late June, the award-winning vocalist shared the sacred stage with close friend and mentor Josh Abbott to sing their 2016 track, “Wasn’t That Drunk.” The hitmaker revealed the special moment on social media over the weekend (July 8) and recalled sweet memories they shared.

While sporting a Loretta Lynn-inspired dress, Pearce kicked the liquor-infused single off and delivered the twisted tale about two friends sparking a romantic flame. Throughout the chemistry-driven track – Pearce admits that she can’t blame alcohol for her affectionate actions, because she “Wasn’t That Drunk.”

“I was tipsy when you kissed me |But that ain’t why I kissed you back| I’ll be honest, I’ve wanted to do that, to do that, do that | Oh so long and oh so bad,” belted Pearce before lead vocalist of the Josh Abbott Band joined in. “Then last night, it happened so fast | I’d do it over, I wouldn’t think twice | ’Cause lying here sober, it still feels right,” they harmonized.

The lyrics to “Wasn’t That Drunk” rolled right off Pearce’s tongue, as she has been singing the song for almost a decade. Before Pearce became a household name with her award-winning record “29: Written In Stone” and major-label debut “Every Little Thing,” she would travel to Texas to deliver “Wasn’t That Drunk” with the Josh Abbott Band.

“Over 6 years ago, Josh Abbott asked me to sing on this song ’Wasn’t That Drunk,’” she explained in a TikTok video. “He used to pay for me and my band to travel & open shows because I couldn’t afford to.”

She continued to point out why their Opry performance struck a chord and held significant weight. To this day, Pearce credits Abbott for taking a chance on her.

“We played the Opry on the same night last week & sang together for the first time in YEARS,” said Pearce. “I’ll never forget what he did for me all of those years ago…”

As the two delivered the love song, footage of old performances began to play – showcasing her rapid rise to fame and growth as an artist. Despite the years that have gone by in a blink of an eye, Pearce confirmed that the song still holds a special place in her heart.

“And I still love this song❤️❤️❤️,” she stressed.

The reminiscent clip garnered over 80.3K likes on TikTok alone. As many fans flooded the comment section with praise, several others acknowledged Pearce’s go-getter personality and drive.

“When Josh started to introduce this song, I nearly fell out of my char with excitement!! Sounded even better in person,” said a ticket-holder in attendance. “Seeing your success now is so inspiring and so DESERVED,” gushed a follower. “Why did this make me cry? I absolutely love this song and so proud of you both!” added another.

“Wasn’t That Drunk” was initially penned for Lady A and Little Big Town by Emily Weisband, Neil Medley, and Matt McGinn. Once Abbott got his hands on the track, he knew he had to record it immediately.

“The minute I got it, I listened to it like six times in a row, and I thought, ’This is it, this is a smash. We just gotta get the right girl on it,’” he explained to Rolling Stone in 2016. “It sounds like our band, but it’s got just enough pop elements to make radio happy, and it’s got just enough touch — fiddle and all that — to make our fans happy.”

Abbott and Pearce did not have a tight-knit relationship at the time, but he knew her wide vocal range and captivating sound would bring “Wasn’t That Drunk” to new heights.

“I actually didn’t know Carly Pearce that well, but I knew she was the right voice for the song,” the vocalist told Wide Open Country. “I think that’s just one of those really cool stories that, as we go down the road, we’ll just know it was meant to be.”

“Wasn’t That Drunk” lives on their critically acclaimed record, “Front Row Seat.” Upon release, the 16-song project peaked at No.1 on Billboard’s Independent Albums chart.

Pearce is currently opening on the Here And Now Tour. The must-see show will run until August of 2022. Tickets to see the star-studded lineup are available for purchase.