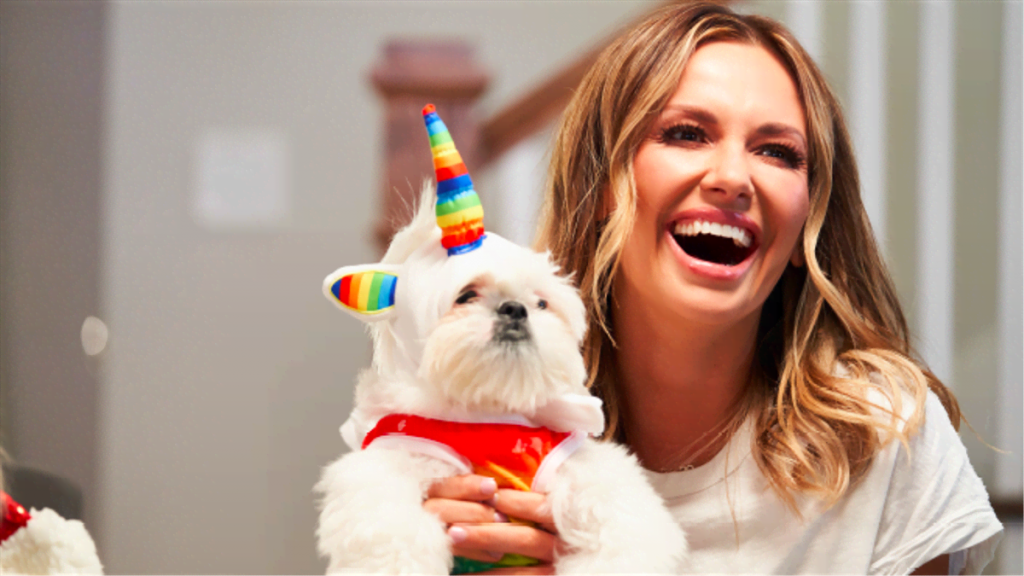 There is more to Carly Pearce than meets the eye.

While getting dolled up for the Kenny Chesney concert, the “What He Didn’t Do” singer rattled off fun facts about herself on social media. With her hair wrapped in a tight towel and a fresh face, the hitmaker started to share shocking details about her life.

“I’m playing a show with Kenny Chesney tonight,” she said in a selfie-style TikTok video. “I thought while I do my makeup, I would tell you a bunch of random facts about me.”

While dipping her finger in an eyeshadow palette, she began to expose some unknown truths.

1. “I have been 5’8 since I was in the fifth grade.”
2. “I have two Shih Tzus named Johnny and June, and I have a chocolate lab named Retta Lynn – after Loretta Lynn. I have a cat named Emmy Lou, after Emmy Lou
Harris. Obviously, I sing country music. So, I guess I’ve got a full country band.”
3. “Speaking of my love for classic country – I moved away when I was sixteen from my hometown in Kentucky to sing at Dollywood. The most full-circle moment happened to me last year, when Miss Dolly Parton herself asked me to be a member of the Grand Ole Opry.”
4. “I have a small addiction to Orbit gum. I probably go through one of these every day…and yes, that’s a three-pack.”
5. “I got married and divorced at age 29, and I wrote an album about it. It was nominated for both ACM and CMA Album of the Year.”
6. “Most people would think that because I’m a singer and an entertainer, I can sing in front of a bunch of people that I would be extremely extraverted, but I’m actually super shy and really introverted.”
7. “I’m one of those weird people that is deathly afraid of vomit, so if you have vomited in the last, I don’t know, month – don’t come near me.”
8. “I live with twelve people on one bus. A lot of boys, a few girls. I have to say that probably out of all of us, I’m the raunchiest and the grossest.”
9. “I have OCD about things so badly. For example, when I leave my house, I check my plugs and outlets and candles like eighteen times. I probably didn’t even light a candle in the last, like, four weeks – It still could be on. I have to take pictures to remember that I turned things off, and I still think that I didn’t unplug it and that there’s still a candle burning.”
10. “I will do anything… and I mean anything, to make somebody laugh.”
11. “My favorite pastime is walking through the grocery store. Aye Publix, love you.”
12. I am the reigning ACM and CMA Female Vocalist of the Year. Which was, like my biggest dream as a kid come true.”
13. “I think farts are the funniest thing in the whole world.”
14. “And last, but not least – see all this hair? She’s fake.”

Pearce’s vulnerability and honesty instantly resonated with fans, as the clip raked in 627.6K views and 49.4K likes on TikTok alone. The country community ran to the comments to point out their favorite facts, her flawless skin, and to reveal secrets of their own.

“Here is a random fact, I deliver your parent’s mail! I have seen you a few times before, but I act like I have no idea who you are because I’m a scaredy-cat,” said a Kentucky-based follower. “Drop your skincare routine,” gushed another.

Following the endless praise, Pearce decided to create a “part 2” of “random facts.”

15. “I have the biggest head of anyone, including every man that works for me.”
16. “I’m super weird about meat, especially chicken…honestly, all meat. Sometimes, I will literally take 30 minutes to cook meat and look at it and throw it away.”
17. “My Starbucks order is an iced coffee. No classic – two pumps of sugar-free vanilla, two Stevia, and oat milk. Just call me – basic.”
18. “Something really weird about me is, I don’t eat a lot of desserts. But I freaking love making desserts for other people, like preparing it. Especially for my bandmembers, then watching them it eat.”
19. “I’m THAT drinker that can go weeks without drinking, and then just one night drink every single bit of alcohol in sight.”
20. “When I finish a show – the second I come off stage, I get in my pajamas no matter if it’s 6:30 PM and I’m playing a festival or if it’s 10 o’clock at night. I am a bonified grandma.”
21. “I am a bit of a contact- hypochondriac. If somebody around me says that they are sick, I will literally get symptoms of whatever they tell me.”
22. “When I was fourteen years old, I used to sing bluegrass music, and I sang at an all-boys prison. And they made me wear a baggy t-shirt and glass to try to cover up that I was a girl.”
23. “My favorite ice cream flavor is chocolate chip cookie dough. My favorite ice cream is Graeter’s if you are from Cincinnati or Northern Kentucky.”
24. “When I’m stressed, the only thing that fixes it – other than wine – is shopping. I love to shop, it’s a problem.”
25. “When I was a baby, instead of stuff animals or TV shows or something keeping me from crying – the only thing that kept me from crying, is that my mom would strap a Walkman. For those who don’t know what that is – it’s like a little cassette player and headphones to my diaper, and I would listen to Vince Gill.”
26. “When I’m home from the road, I get up really early, like in the five O’clock hour. Like a weirdo.”
27. “My favorite movie of all time is ’It’s Complicated,’ with Alec Baldwin and Meryl Streep. I probably have seen it 100 times.”
28. “And lastly, I think I love my dogs more than most people.”

Carly Pearce is currently opening on the Here And Now Tour. The must-see show will run until August of 2022. Tickets to see the star-studded lineup are available for purchase.