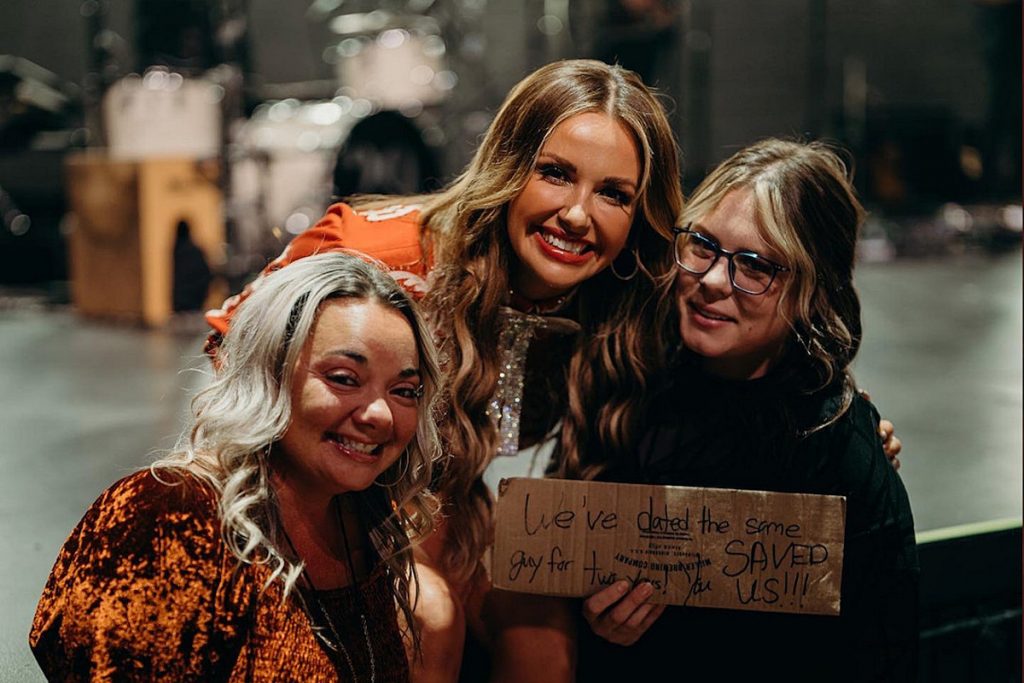 Carly Pearce Meets a Pair of Fans With an Incredible Story


Carly Pearce wrote the songs on 29: Written in Stone about her real-life experiences with navigating divorce and grief. Once she put out the project, though, she began to realize that through sharing her stories, she’d helped fans tap into their own, and she began to connect with her listeners more deeply than ever before.

Case in point: Pearce encountered two very special fans during a stop on her The 29 Tour in Albany, N.Y. on Saturday night (March 19.) She shared the story on social media after the show, including a pair of photos taken after the two women explained their story.

“Meet Tara & Ashley,” Pearce wrote. “During my show last night, I kept seeing a girl flashing a cardboard sign at me, but I couldn’t read it from the stage. I finally stopped the show & asked her what it said.”

As it turned out, it was two friends attending the concert together, and they had a special message for Pearce about her current single, a duet with Ashley McBryde called “Never Wanted to Be That Girl.” The song tells the story of a man’s infidelity from the perspectives of the two women he’s caught between, with each woman — one of whom is a wife, the other of whom is a person he started dating on the side — explaining her story of betrayal, shame and devastation.

It’s a story that Tara and Ashley have lived. As Pearce got closer to their cardboard sign, she realized what it said. “‘We’ve dated the same guy for 2 years. You saved us!'” the sign reads. Pearce was so moved by the story, she shared a hug and snapped a couple photos with the fans after the show.

“The power of music,” the singer reflects in her social media post.

“Never Wanted to Be That Girl” is currently sitting at No. 8 on the Mediabase country chart. The song also earned Pearce and McBryde an ACM Award for Music Event of the Year earlier in March; backstage at the awards show, she told press that as devastating as the past couple of years have been, they’ve paved the way for a powerful new chapter in her career and life as an artist.

You’ll find much more than just the Top 10 Country Songs of 2021 on this list. Enjoy the 21 best country songs of the year, based on Taste of Country staff and country music fan opinion, plus commercial data (sales, streaming, airplay).