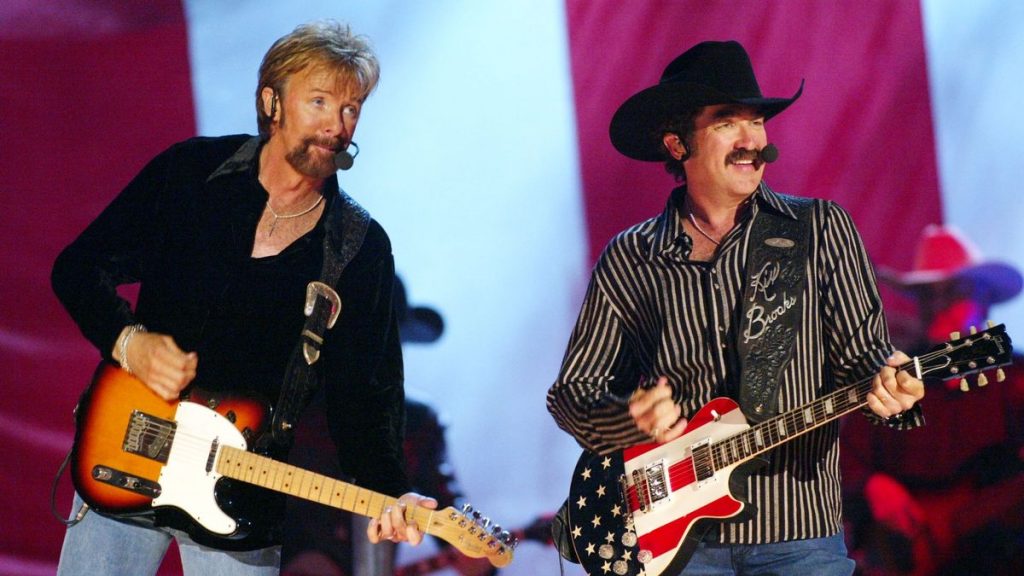 Brooks & Dunn Talks Reboot Tour, What Fans Can Expect and What Makes Them Nervous

Brooks & Dunn jokes they’re not shooting themselves out of a cannon on their Reboot 2022 Tour, explains they sent all of their inflatable women to The Rolling Stones and that their glitter steer heads and hanging in their homes.

In other words, people who buy concert tickets should come to the shows to hear the duo’s 20 No. 1 hits and not for the over-the-top production of Brooks & Dunn’s early days.

“I don’t think we’ve done anything quite like this before, but we hired some really hot guns to come up with something,” Kix Brooks said. “Once we all got done with the huge sets, the simplicity of acts like ZZ Top that let the music just jam like it was supposed to, that’s kind of how we approach this.”

“It’s a full stage,” Ronnie Dunn added. “You won’t be missing anything.”

The “Boot Scootin’ Boogie” duo roped in several country music’s most popular new stars to join them on tour. Their opening acts include Gabby Barrett, Jordan Davis, Riley Green, Walker Hayes, Jon Pardi, Morgan Wade, King Calaway and more. The two-month tour launches May 5 in Evansville, Indiana, and concludes June 25 in Detroit, Michigan. The men will play Nashville on June 18. Tickets are on sale now for every show but Nashville. The tickets for the Music City concert go on sale March 18.

“Nashville used to scare us to death because everyone’s got their opinion on what the act is about and all that stuff,” Brooks said. “We’re not really running scared like we used to. Not that we were afraid of it, but you’re just nervous about playing here because the reviews the next day. I think right now we’re just having so much fun on stage. And honestly, last year was a good run for us. I mean, I came off of that, and I think Ronnie probably did, too, going, ’Well, that was good.”

“We’re not laying down,” he explained. “We’re just trying to do something that’s different that still makes people go, ’Wow, that’s cool.’ Those are the moments we’re looking for. You don’t have to be ridiculous.”

The singers said they’ve learned over the last 30 years that the moments they invest so much in production often don’t end up being the parts fans remember, anyway.

“All those crazy things and confetti and all that stuff aren’t what people have been talking about,” Brooks said. “They’ve been asking us about the music and the songs. I think both of our biggest fear is that with all this nonsense on stage that we have so much fun doing, ’We’re not gonna lose the music here, are we?’ It’s funny, all these years later, the real compliment is (people) asking about the music. That makes us feel good.”

Brooks & Dunn said they’re still figuring out the setlist, but one thing is for sure – they’ll play plenty of hit songs.
“We’re selling memories here a lot at this point as well as the music,” Brooks said.

“But, we’re also introducing new fans to that music, too, to see how it stands up,” Dunn added.

Tickets for the Reboot 2022 Tour (except for the Nashville date) are available now at brooks-dunn.com.