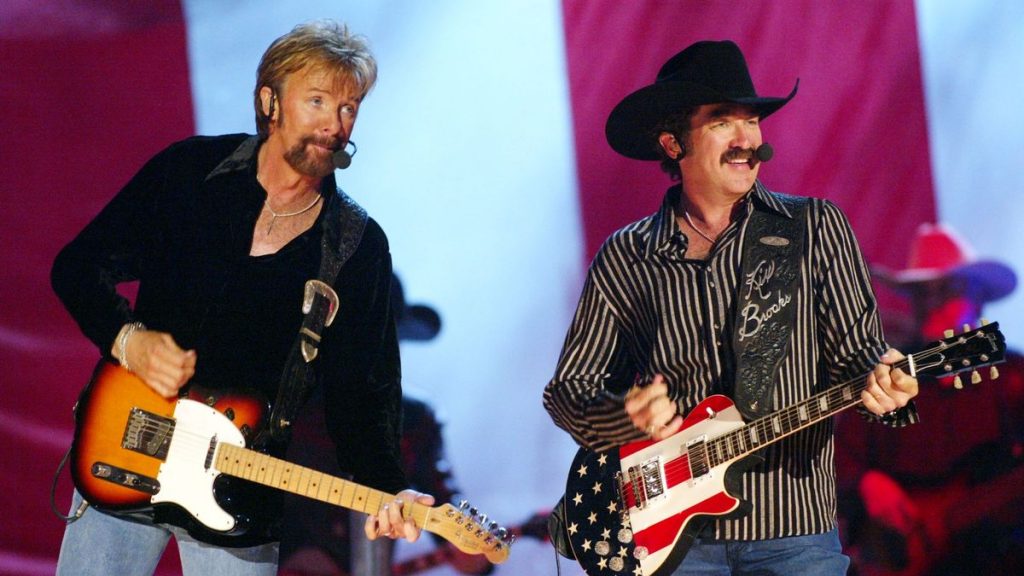 Sure, Brooks & Dunn have created a tapestry of honky-tonkin’, boot-scootin’, good-timin’ songs, but woven throughout that tapestry is a thread of sensitive songs in which the guys express their deepest feeling directly to the ladies who’ve captured their affection.

You’ll notice that a great number of these lyrics were co-written by the lads themselves. Here are 10 examples (plus a bonus tune) to remind us of how serious B&D could be when they put their minds to it.

The loved one has decamped without warning or even a hint that there was anything amiss, leaving only a lipstick kiss-off on the mirror. Such a terse farewell elicits this cry from the heart: “Don’t you think that I deserve to hear you say goodbye?”

Here the impending separation is slow enough to allow for a threat and a warning: “You better kiss me/’Cause you’re gonna miss me when I’m gone.”

Finally, a song in which the guy is the Apple of Discord. He let his pride and stubbornness get the best of him and just walked out on her last night. This morning he sees his mistake and is begging her forgiveness.

While not to be confused with the Patsy Cline and Loretta Lynn classic, “She’s Got You,” this one has the same dynamics — that is, torturing yourself by imagining your beloved cavorting with another. “He’ll hold you tonight but I won’t/What’s he got that I don’t?”

The title pretty much tells the whole story. “My heart just can’t leave you alone/My mind won’t believe you’re gone.” There’s no declaration of who’s at fault in the breakup — only that it hurts like hell.

This is a cover of John Waite’s 1984 No. 1 pop hit in which the singer alternates between grieving for the one who’s left him and trying to convince himself he’s not missing her by repeating his denial. Sort of like “She Thinks I Still Care.” Tina Turner and Rod Stewart are among the many who also recorded this song, and Waite re-recorded and released it as a duet with Alison Krauss in 2007.

An exercise in persuasion and reassurance in which the suitor swears his love is as constant and reliable as the sunrise.

Here we have a proclamation of total love and acceptance. Fortunately, the phrase “warts and all” doesn’t appear in the song, but it’s strongly implied — “There ain’t nothing ’bout you/That don’t do something for me.”

Ah, is there anything as exciting as love at first sight? Not according to this billet-doux.

This is a chronicle of a family being created from first love to parenthood. “I’m proud of the house we built/It’s stronger than sticks, stones and steel.”

Not a love song but an unquestionably passionate one. Brooks & Dunn recorded the 2019 version of this inspirational tune with Kane Brown. Apart from its keep-the-faith message, the song is also notable for its story and imagery.

What we have here is a whole lotta love.