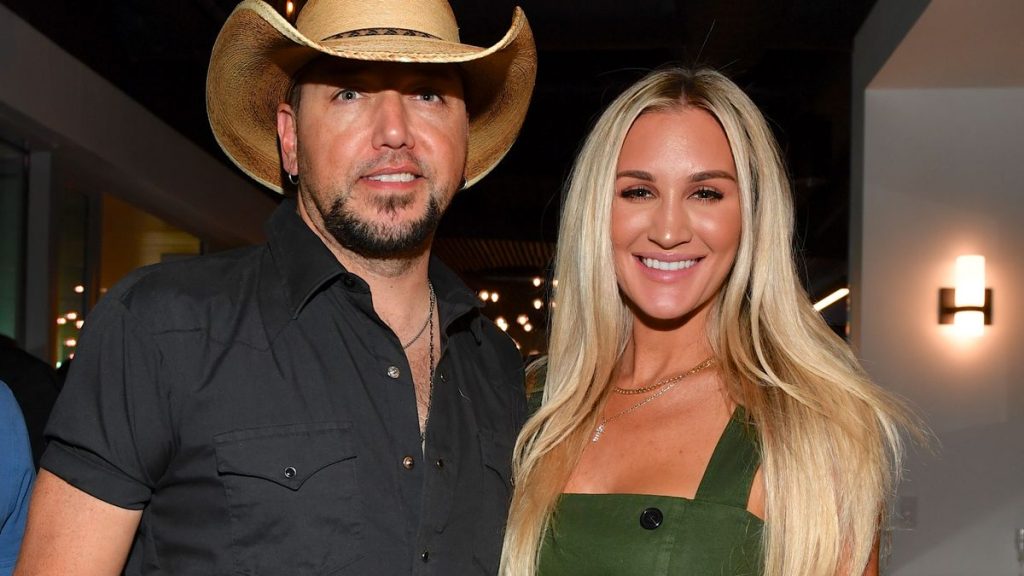 Brittany Aldean is an open book. And so is her country star husband, Jason Aldean.

They share just about everything on social media, from their lives at home with their little ones Memphis and Navy to professional highlights from Aldean’s country music career. But with such a vast following — Jason has 3.2 million followers and Brittany has 1.8 million — not everyone likes what the Aldeans post.

When I caught up with Brittany, we talked about living with that kind of criticism, living through a pandemic, and living her life knowing that being okay with being strong and curvy is what matters most.

CMT.com: This Covid-19 pandemic has hit so many people so hard, and I know that for country artists like Jason, it has been one of the toughest years of his career. But what’s the year been like for you, having him at home instead of on the road?

Aldean: I will say it’s nice to miss someone occasionally after being together all day, every day, 24,7. (Jason) went on a trip not long ago with his friends, and when he came home I was like, “Oh, it’s so good to see you.” But I’m so used to him being gone, so it’s been definitely different. Having two babies, it is so great to have the help early in the morning, or even at bedtime. We tag team. So it’s really nice to have a partner around, especially when the babies are this young.

But you can’t get to used to that, right? Because God willing, Jason will be out touring again in 2021. As you look ahead to your own 2021, has the pandemic given you a new way of thinking about a literal New Year?

I am excited for the day Jason goes on tour and things get back to normal, but then I dread the day in a sense because when it goes back to normal, I won’t have him home all the time anymore. I feel like the artists and the entertainment industry have been hit really hard, because concerts are just something that’s just not happening. And I think he’s just been so ready for so long to get back on the road. I’m hoping that that becomes normal for his sanity. And I’m going to make more of an effort to go out on the road a little bit more. It’s getting a little easier now that the kiddos are getting older. (Memphis is three and Navy is almost two.) It’s always hard having an infant on a tour bus. It’s a lot of tough, bumpy roads and late nights.

What do you think you’ll remember most about living through the pandemic, when it’s in the very, very distant past?

I have definitely been humbled this year. I think there’s a lot of things that we all took for granted. So now we’ve realized that having these jobs and opportunities are such a blessing. This year was a pause moment for everybody. Initially, it was just an inconvenience. And then finally it was like, “Oh no. This is kind of a new normal.” And it was weird and shocking for everybody. I think by now we are all just itching to get back out there.

The new normal for so many of us was to be still and stay home. And sometimes, that meant a few more Covid calories than we’d like. But you’ve been so open about how you stay healthy, and your diet of choice. How did the South Beach Diet get you to your happy place?

It’s just very simple. It’s very low carb and high protein, and when you mix in exercise, you have something that’s attainable even if you’re a busy mom. I know that mom weight can linger for a little bit, so it’s nice to have something that’s this easy, because your focus should be on your children. And I’ve just come to terms with accepting that your body does evolve with age, and that’s okay. Being healthy and strong and curvy is a great thing.

You and Jason both seem genuinely comfortable connecting with everyone on social media. Was that intentional, or did it just happen organically as your fan bases grew?

It’s tough to say, because it’s kind of day-to-day and it depends on my mood on what I’ll post. But I feel like my skin has become super thick. Jason’s has too, obviously, because he’s been doing this for a very long time. We’ve both realized that not everyone is gonna agree with what you do or how you look or the way you do your child’s hair or whatever it may be. I know people are always going to find an issue with something, and I’ve come to the realization that that’s just what it is. So there’s no reason for me to stop my life. And we’re so thankful for our fans and Jason’s fans who love him and love us through so much, that there’s no reason why we shouldn’t still be sharing our personal lives with them. Just because some people say things that you don’t want to hear.

Knowing that, have you had to just stop reading all the comments? Both the good and the bad?

Oh no. We actually them read a lot. I’ve gotten a lot better about trying to just let it go. But with Jason, especially if it has to do with his music, it’s just hurtful. A lot of times people don’t realize that we’re human and actually have feelings. But we are not going to stop living our lives just because there are people out there who are rude.

It’s kind of sobering to have to take the good with the bad, especially knowing that Jason is an artist. I think creative people tend to take criticism more personally. Have you ever felt that way?

When I did American Idol back in the day (in 2012), it was very hard to stand on a platform and accept personal criticism. It’s like, “Okay, I’m here on the stage for the whole world to let me know what they feel.” And a lot of people aren’t so kind, so that does make it hard. But I think Jason and I have both been through a lot and learned a lot, so there’s really not too much you could say that we haven’t heard before.

Watch the lyric video for Aldean’s latest single, “Blame It on You.”