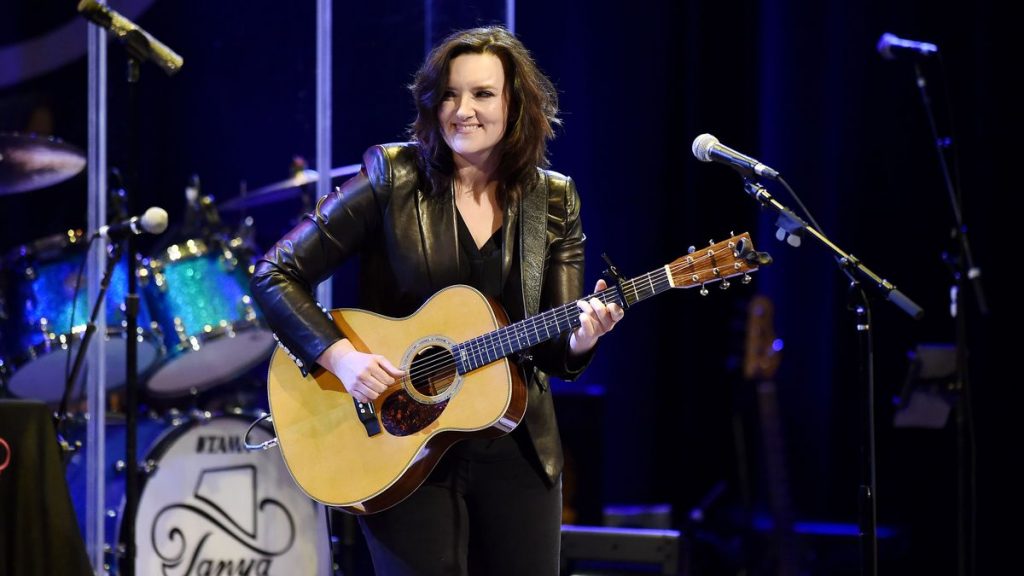 Brandy Clark: A Long Way from the Blueberry Bus

A few dates into her CMT Next Women of Country tour with Tanya Tucker, Brandy Clark shared with me the secret for always appreciating the job she has now: a past full of hard labor.

“My very first job, in Washington state, was a blueberry picker. I was paid by the pound. The blueberry bus would come pick you up in the morning, just like a school bus, and take you out to the blueberry farms and you’d pick all day. I had a lot of hard labor jobs like that before I came to Nashville,” Clark told me. “And that taught me how fortunate I am for this job I have right now.”

This job, of course, is being an artist. But Clark said that she looks at that one job as three jobs: songwriter, singer, and live entertainer. Three jobs that she is equally and uniquely good at.

CMT.com: How do you balance those three jobs, without giving up any of the momentum you’ve had in each one?

Clark: I try to keep them separate. So I took last year to write songs and make my record, and that meant I didn’t play a lot of shows. You just get into a different rhythm. It’s hard, though, when you’re writing and only do shows sporadically. But I love them all equally, and I try to not do all three jobs at once. If I am on tour, I might not be writing full songs, but I do kind of mine for ideas so that when I’m back in town writing, I have a well I can draw from.

I’ve always thought of you as a singer-songwriter who makes songwriting look so effortless. But it’s not the case in real life, right?

Well, it is a job. It’s about going in and grinding it out. If anyone tells you differently, they probably haven’t been doing it for a very long time. Before I made 12 Stories (in 2013), I was a staff songwriter for a decade. Writing every day, staying inspired, and doing what you needed to do to stay in tip top shape as a writer. The hard part is, it can burn you out. I’ve written a lot by myself, and you worry that you’ll run out of ideas. For me, when I’m writing alone, I write two kinds of songs: really sad or really funny. There’s not a lot of in between with me. So if you want different songs, you’re gonna have to bring in other painters to help you paint the picture. And you learn so much from other songwriters, because most songwriters are very smart.

How do you prepare for a writing session when you’re in your songwriter mode?

I get my ideas in order, and I also try to learn a little bit about who I’m writing with. If it’s a lyricist, I know I need to bring the music that day. Or if I’m writing with someone who carries it musically, then I need to come in with an idea that I have for a bit of a lyric.

And once you were ready to actually record the songs for the new record, Jay Joyce was your producer for the second time in a row. How much does that influence — or not influence — the music?

I always think of the producer as the last writer of the songs. Meaning, they weren’t involved in the writing process, so then when they hear the song for the first time, it’s their job to take it someplace I wouldn’t. And even though I’ve made two records with Jay now, I feel like I’ve made two very different records. And he is one of the few people who can do that, and we both agreed we didn’t want to make the same album twice. So I told him it might be great to cut it all acoustic. He was super excited about that, and we did it with just four of us. That was our sonic concept. I usually have more of a theme with an album lyrically, but with this one, we just knew sonically where we wanted to land. It became a break-up record, but I didn’t even think about that as we were picking songs. It’s just what bubbled up.

This is your third full studio album. So you’ve been at this recording artist job now for seven years. But country radio isn’t exactly giving the music a chance. How do you come to terms with that?

I grew up with so many women I loved on country radio — Tanya Tucker, Patty Loveless, Pam Tillis, Trisha Yearwood, Suzy Bogguss — so that was the dream. That’s where I thought my music should live. I worked hard for “Girl Next Door” at radio, and it was heartbreaking to me that some stations were playing it, but overall, the support just wasn’t enough to get it higher than the top 40.

So what’s an artist to do? Do you just put radio on the back burner and focus on the other ways you can share your music with fans?

My manager said to me, “You can’t keep beating on a door that’s not gonna open. You just have to walk through the doors that open.” So with this record, my supporters are still there. Then you find out that my new song “Who You Though I Was” is up in the top 20 on Americana radio. I’m proud to be among those Americana artists. So instead of focusing on what it’s not, I’m focusing on what it is. I don’t care what format wants to embrace my music as long as they’re playing it.

And being out on the road with Tucker has to mean that your music is now in the hands of an entirely new batch of listeners. Did you ever picture that nearly 20 years into your Nashville life, you’d share the stage with such a legend?

I’ve always been a big Tanya fan, so it has been a really nice gift. I was just in Europe headlining, and my sets were really long. So it’s been nice to come back and be in support slots with an artist I genuinely love and look up to. I can do my set, and then enjoy her set, which is over two hours.

She plays for two hours? How does she do it?

I think it’s her tequila.

She is definitely an entertainer. Like Jennifer Nettles is. Or like Dwight Yoakam and Willie Nelson are. They all have that high energy in their shows. I think what I really take away from Tanya is that all of that is great, but at the heart of it, artists like her just have really great songs. Tanya could just stand up there and sing her songs if she wanted to, and people would love that. The first night I was out with her, I expected this rowdy drinking crowd, so I had tailored my set for that. Then I realized, “Oh man, these people came to listen.” Tanya is just an artist with a lot of substance.

Clark’s next stop on the CMT Next Women of Country tour with Tucker is on Feb. 20 in Memphis, and her new album Your Life Is a Record is due out March 6.