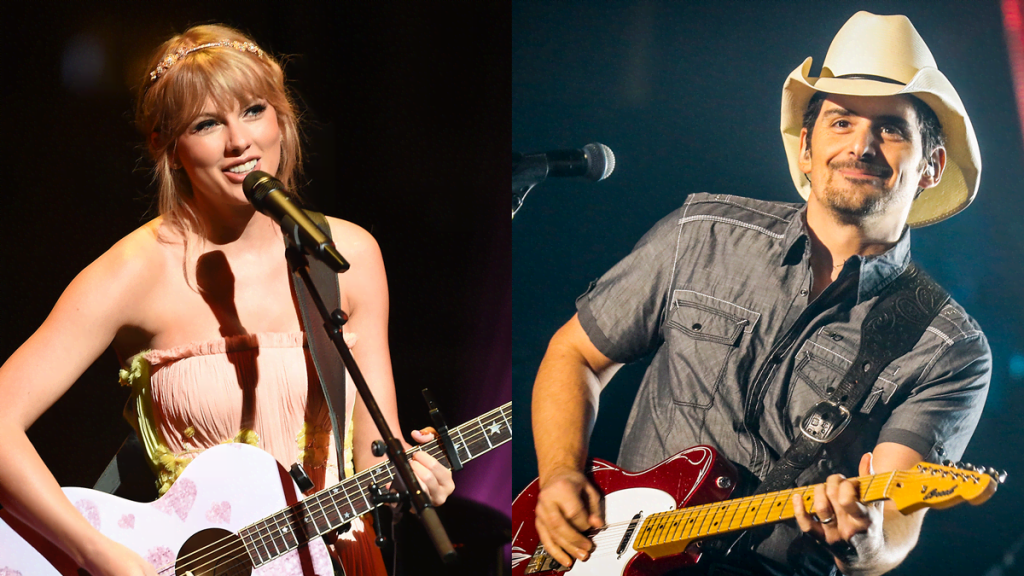 Brad Paisley’s In, Taylor Swift’s Out: The Story Behind the Legends Mural Reno

No better way to spend a music city weekend pic.twitter.com/blGe0O70Bb

For the past four years, the mural outside of Legends Corner at the corner of 5th Avenue and Broadway has been a must-see for the millions of tourists who wander in and out of the honky-tonks up and down Broadway.

Which is just what Nashville muralist Tim Davis wanted. When he unveiled the painting in December of 2016, he was essentially showing the world his vision of how artists from every era are all welcome to sit at the country music table. A close inspection finds Tim McGraw, Loretta Lynn, Blake Shelton, Dierks Bentley, Willie Nelson, Johnny Cash, Keith Urban, Merle Haggard, Reba McEntire, Alan Jackson, George Strait, Dolly Parton, Garth Brooks and Taylor Swift.

But now, Swift has left the mural and Brad Paisley has taken her place.

In a call with CMT, Davis explained the process for the original design, the revision and the actual art of painting.

“This is the first time we’ve ever made any changes to the mural,” Davis told us of the larger-than-life painting on 5th Avenue. “But when I installed the mural, the owners of Legends Corner had the intention from the beginning of having the mural evolve. So I painted Brad Paisley over Taylor Swift, and as soon as I can, weather permitting, I will be adding more people to it when the people at Legends Corner approve it.”

Davis also explained why he needs the weather to cooperate. “It has to be at least 45 degrees for me to paint. I use an artist’s acrylic with an anti-graffiti coating,” he explained. He hopes to have the remainder of the renovations done in January.