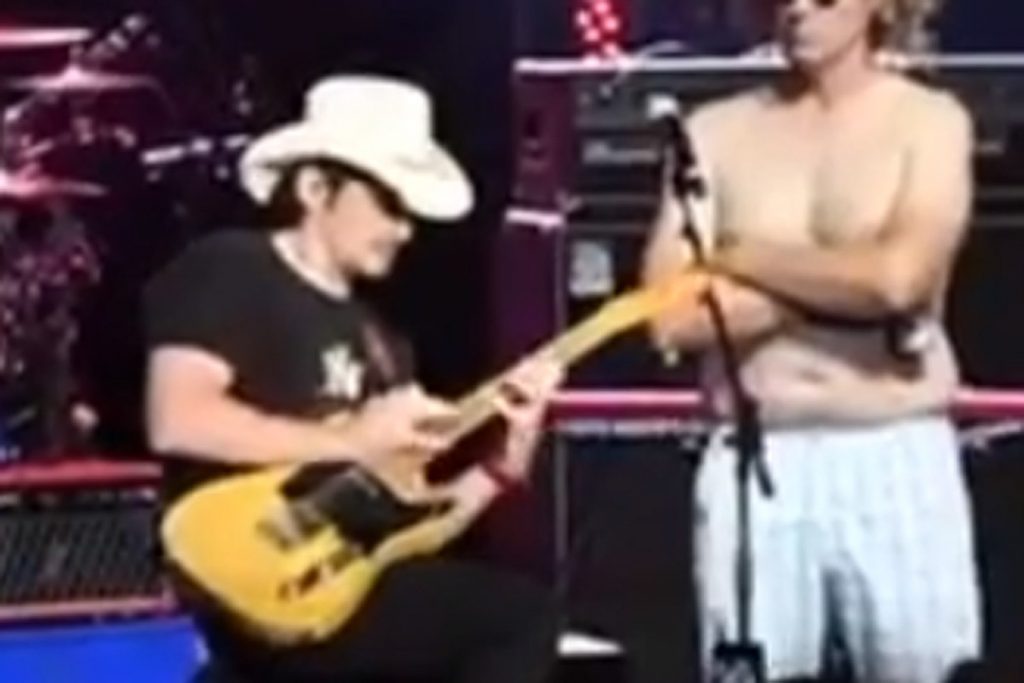 
Brad Paisley was one of the many musicians from across all genres who turned to social media on Tuesday (Oct. 6) to pay tribute to the influence of Van Halen guitarist Eddie Van Halen, who died on Tuesday at the age of 65 after a decades-long battle with cancer. Paisley lauded Van Halen’s “fire and style” and shared a clip of himself teaming with an all-star band to deliver a cover of one of Van Halen’s signature songs, “Hot for Teacher.”

“I am so sad to hear we lost @eddievanhalen today,” Paisley writes alongside a picture of Van Halen playing on stage with his trademark uniquely painted guitar, his usual smile on his face as he performs for fans.

“I loved everything about the fire and style he brought to the guitar. I studied him, heck everybody did, we all wanted to play just like him. But no one did it quite like him,” Paisley states. “Thank you Eddie for being a pioneer. It’s unimaginable what the guitar would be without you.”

Paisley subsequently posted a clip of himself on stage with Red Hot Chili Peppers drummer Chad Smith, Guns ‘N’ Roses bassist Duff McKagan and actor Will Ferrell, who is dressed up like Van Halen’s original lead singer, David Lee Roth, as they perform “Hot for Teacher” from Van Halen’s 1984. That album marked Roth’s final outing with the band before he departed and Sammy Hagar came in to front the group.

The song is a textbook lesson in Van Halen’s groundbreaking approach to the electric guitar, featuring rapid flutter picking, finger tapping in which he employs his right hand to fret notes further up the fingerboard, unusual phrasing and the odd rhythmic accents that all worked together to form his inimitable style.

Best known for his brand of country picking, Paisley handles the rapid-fire parts in the song with remarkable prowess in the video, revealing a side of his influences and playing that his own recordings do not hint at.

Van Halen had battled cancer off and on since 2000, when he had approximately one-third of his tongue removed due to the disease, according to Ultimate Classic Rock. He was declared cancer-free in 2002 but was later diagnosed with esophageal cancer in 2011.

The guitarist’s son, Wolfgang Van Halen, confirmed the news of his death at the age of 65 in a post to social media on Tuesday.

Kenny Chesney and Keith Urban are also among the artists who turned to social media to salute Van Halen’s friendship and influence following the news of his death.