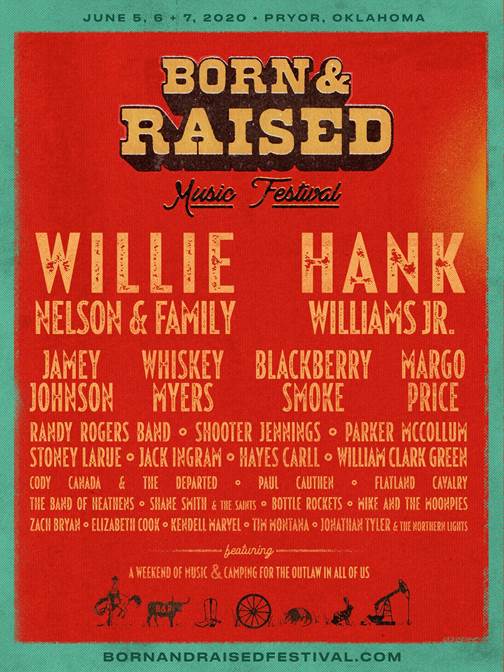 Announces Inaugural Lineup
Headlined by Willie Nelson & Family and Hank Williams Jr.
A Weekend of Music & Camping For The Outlaw In All Of Us
June 5, 6 and 7 in Pryor, Oklahoma

“Born & Raised Music Festival came to life with an idea to celebrate Outlaw, Texas, and Red Dirt country music. To us, there is no better place to have it than deep in the heart
of Oklahoma, the birthplace of Red Dirt,” shares Festival Producer Mike DuCharme of
AEG Presents. “These genres are showing a resurgence right now on
the music scene. People want to celebrate their roots and listen to
music that reminds them where they were born and raised. When looking to
kick off year one of this event we could think
of nobody better than Willie Nelson and Hank Williams Jr. to headline
each day.”

Presale passes for Born & Raised will be available beginning Wednesday, February 12thwith early bird prices on-sale to the public Friday, February 14th at 10am Central Time. Weekend General Admission Passes start at $89.50 with reserved seating starting at $159.50. VIP packages, starting at $469.50, include up-close reserved seating and VIP parking plus access to the Red River Saloon with private, unplugged sessions with select artists (to be announced), catering, water and soft drinks throughout the weekend. Tent and RV camping options also available. Additionally, Born & Raised has partnered with GovX to provide discounted passes for military and first responders starting at $79.50. The Friday night pre-party on June 5th will be available to anyone with a weekend pass; lineup details coming soon. To sign up for the presale, view full pricing and package details, and to purchase passes, go to www.bornandraisedfestival.com. Payment plans available.

The full lineup for Born & Raised Music Festival is as follows: