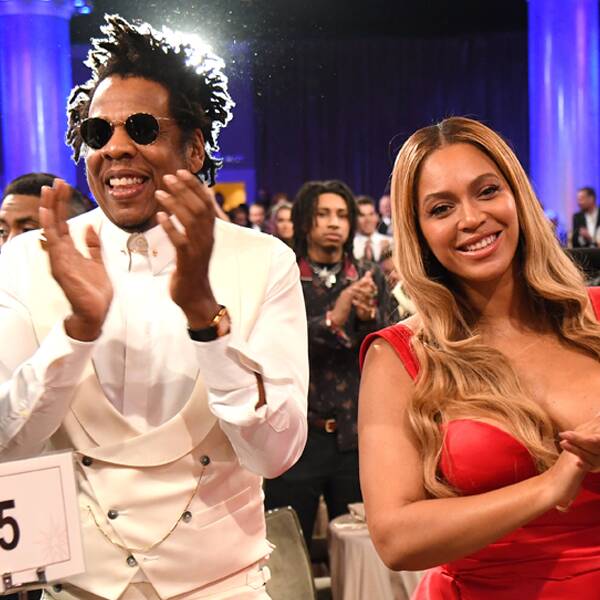 It’s just hours until the 2020 Grammys and Beyoncé is already serving up some seriously stunning looks!

That’s right, plural; The pop and R&B star, who is nominated for four Grammy Awards this year, spent most of Saturday at not one but two pre-Grammys events—her husband Jay-Z‘s Rock Nation’s brunch and later, Clive Davis and the Recording Academy’s gala in Beverly Hills.

At the first party, she wore a body-hugging powder blue mini dress by Francesco Murano. At the second, she sported a red sleeveless silk Valdrin Sahiti gown with a thigh-high slit and long train, paired with sparkling Christian Louboutin pumps.

Beyoncé posted several photos of herself wearing the outfits on her Instagram page.

This year, the Recording Academy and Davis’ annual star-studded pre-Grammys gala honored Sean “Diddy” Combs, who was joined by his kids. Beyoncé and Jay-Z sat at his table and the men were spotted sharing a hug and smiling. Artists such as Faith Evans, Lil’ Kim and Mase performed and Bey and Jay looked cozy while watching them. The two also later danced together.

See more photos of celebs at the gala:

In his acceptance speech, Diddy thanked Jay-Z and Beyoncé, calling her his “superhero.” He also talked about how he met his late ex, Kim Porter.

Also during his speech, Diddy criticized the Recording Academy, which hands out the Grammys. Beyoncé, Jay-Z and other guests gave him a standing ovation.

“There’s something that I need to say to the Grammys — and I say this with love,” he said. “Every year y’all be killing us. I’m speaking for all the artists and executives. In the great words of Erykah Badu, ‘We are artists and we are sensitive about our (expletive).’ We are passionate. For most of us, this is all we got. This is our only hope. Truth be told, hip-hop has never been respected by the Grammys. Black music has never been respected by the Grammys to the point that it should be.”

Other celebs spotted at the gala included Cardi B and husband Offset, Lana Del Rey and her new boyfriend Sean Larkin, Channing Tatum and girlfriend and singer Jessie J, Janet Jackson, and Usher.