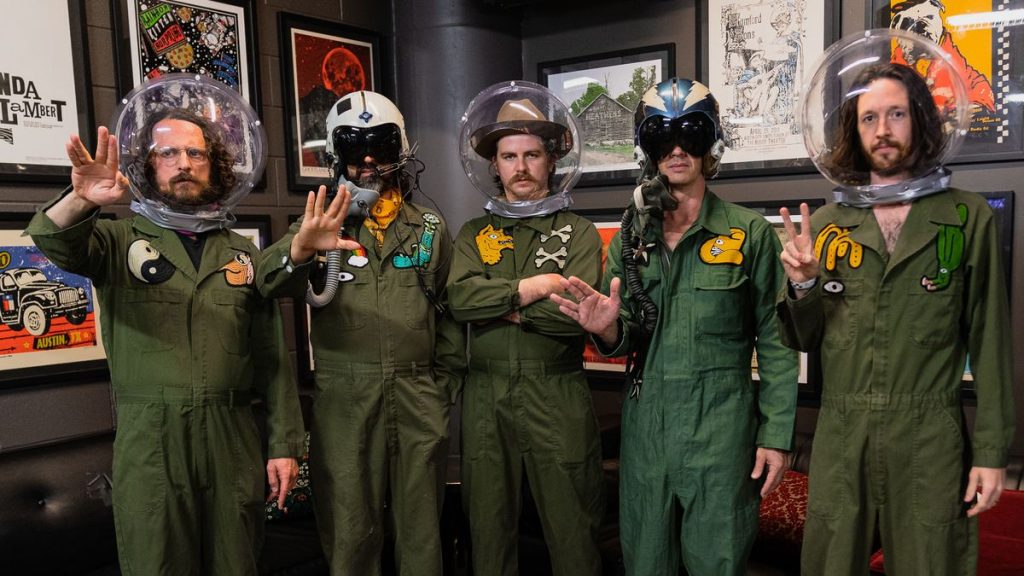 When the Coronavirus pandemic forced the entertainment industry to pump their breaks, several musicians packed up their instruments and patiently waited for the CDC to give them the green light to proceed. However, there was an Americana Rock ’n’ Roll group named Band of Heathens that safety rolled through the stop sign because their creative wheels kept on turning.

In the midst of the global health crisis – Richard Milsap, Gordy Quist, Trevor Nealon, Ed Jurdi, and Jesse Wilson were scattered throughout the United States. The distance between the group did not hold them back from pursuing their craft, but it pushed them to adapt to the unprecedented times and become innovative.

“I think our survival instinct just kicked in,” says guitarist-vocalist Ed Jurdi. “There was a calling for connection and return to some kind of normalcy, which meant getting together with the guys in the band and collaborating, finding a medium to be creative. The onset of the pandemic made us say, ’How do we create things and share them with our audience?’ It was nice to be able to use music as a connective thread and something that’s healing,” he added.

After bouncing ideas off of one another, the five-piece band came up with the idea to host a weekly show titled, “Good Time Supper Club.” Within the ninety-minute variety program via Zoom, there was a fan-favorite segment-best known as “Remote Transmissions.”

“Everyone was scared and uncertain about what was happening, so the show was like a release, where we all connected and forgot about the stuff going on around us. We couldn’t play music together in the same room, so it was like trading songs, having a drink segment, we were even reading Shakespeare – just doing totally ridiculous things. At some point, we decided to bring in guests for an interview, and that turned into ’Hey, let’s pre-record a music video of a cover song with each of them,’” founding member Gordy Quist explained in a recent statement.

Over the course of fifty-two weeks, the ensemble took multiple toe-tapping melodies and made them their own with the help of other creatives in the industry. It wasn’t long until the men had over 50 covers within their musical vault. With a diverse slate of material spanning from country, rock, to even soul – they carefully handpicked the renditions that jumped out at them to formulate their highly anticipated record, Remote Transmissions Vol. 1.

“I feel like rock ’n’ roll is this conglomeration of soul music, country music, and blues. We certainly lean into country more than some rock ’n’ roll bands,” he said. “For example, on the ’Remote Transmissions’ record, there is a Marty Robbins cover of ’El Paso City,’ which is an unbelievably written classic country song. We kind of made a sound without trying to think too hard about what boxes it fits in. I feel like if we play just country music, it weeds out our soul music influences and some of the blues that is definitely in our music,” he added.

He continued to touch upon the recording process and how the group tried to intertwine their distinctive flair without changing the integrity or feel of each old-school ballad. Yet, it was a challenging task to achieve – since they all had to lay down their own tracks individually.

“We didn’t try to reinvent the wheel. Normally, with covers, we would’ve looked for that certain twist to make the songs radically different from the originals. But we couldn’t really do that, because we weren’t in the same room,” he previously said. “So the versions are pretty close to the original arrangements. There was a time crunch with producing a show every week. We didn’t even think about it becoming an album. But all the guests stepped up and did a great job. So it was really hard picking 10 songs for this record.”

Some tracks on the list include – Rolling Stones chart-topping hit “Tumbling Dice,” Guy Clark’s ’90s single “L.A. Freeway,” Bob Dylan’s “The Man in Me,” and Bob Seger’s “Night Moves” with The Silver Bullet Band. However, while working alongside Nicki Bluhm on the remarkable rendition of “Tumbling Dice,” a reliable relationship began to form.

Therefore, the Band of Heathens extended an invitation to Bluhm to join them on their 19-city tour.

“Nicki Bluhm is out on the bus with us touring, and she is kind of part of us rather than being an opening act. She’s kind of part of our band for the whole thing,” Quist revealed to CMT full of excitement. “We’re her band. So her songs are interspersed with our songs, and we are mixing in some of these cover songs from Remote Transmissions. We are also playing our original material. It’s been kind of an interesting tour in terms of being able to collaborate with someone who’s not normally on stage with us.”

While stepping outside their comfort zone on the road, they are also busy creating another collection that will consist of only originals.

“We’re working on another studio album right now,” Quist declared. “I think we may have an EP of some original stuff coming out later in 2022, and then a full LP at the beginning of 2023. Maybe in a year or two, we will go back and do another volume of these covers from the pandemic,” he concluded about the Band of Heathens’ next steps.

Until fans receive original content, they can embrace the chilling covers that brought the light into music-goers lives, when the world seemed dark. Remote Transmissions Vol. 1 is currently available to stream everywhere, and tickets to see the five men and their go-to girl in action are currently available for purchase.