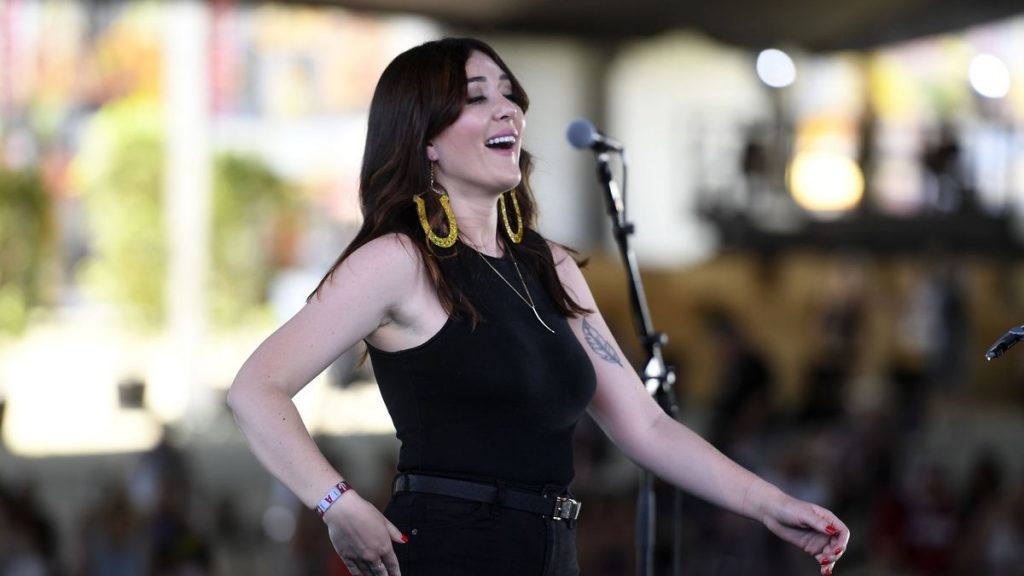 Aubrie Sellers Finds Her Place in Far From Home

One of CMT’s Next Women of Country, Aubrie Sellers is a rare touring artist who actually grew up in Nashville, although she’s now living in Los Angeles. But with a brand new album, Far From Home, she’ll return to the road for a bulk of early 2020.

Sellers co-produced the project with Frank Liddell and recorded it at Sonic Ranch Studios near El Paso, Texas. (Incidentally, Liddell is her stepfather. Her mother is country artist Lee Ann Womack and her father is songwriter and musician Jason Sellers).

In addition, she’ll open a number of shows on the CMT Next Women of Country tour headlined by Tanya Tucker. These dates include February 7 in New York City and a number of West Coast dates in June.

CMT: The song “Far From Home” is so beautiful and emotional. What was on your mind as you wrote it?

Sellers: The reason I made the album title Far From Home, and put it as the first track on the record, is because it embodies the feeling of this record for me. When I was making my first record, I had never been on tour. It was like my first step out.

After that I toured a lot and grew up a lot. I felt like I was coming into myself. I felt a little more grown-up when I wrote this record. So, “Far From Home” for me embodies that feeling of never quite fitting in and trying to find your place. For me, this record is that journey.

What do you enjoy the most about being on stage?

Being on stage, honestly, was a hard thing for me to get used to, as a frontwoman. But I’m excited to be back on the road because I haven’t been touring much over the last year. I think for me, what’s made it fun – and now I’m getting to enjoy it finally – is that I get to share these songs that I wrote and have a connection with people because of them. That’s what’s so special for me.

What did you not like about touring at first?

I’m just very introverted. It’s very hard for me to have that much immediate attention on me. I don’t necessarily consider myself an “entertainer,” not that I can’t be entertaining, but it’s about the music for me. So it was not completely natural for me to get up on stage and feel natural doing it. The only thing that helps is just to get out there and do it a bunch. So, I toured a lot on my first record and it helped me get comfortable and start to enjoy it.

Are you a fan of Tanya Tucker?

Yeah, I’m a fan. I think it is awesome that she’s having this resurgence right now, and she’s getting the respect she deserves. I feel like she’s ascended to legend status. I mean she already was, but I think it’s amazing that she’s still able to create great art that people respect. She’s getting so much recognition for her new album. I find her inspiring, how bold she’s been throughout her career, not just musically but with herself and with her personality. She’s putting it all out there.

What does it mean to you personally to be included among CMT’s Next Women of Country?

I think it’s been a really great program to support new artists, in a time when it’s much needed in the genre. The first show I’m playing on this tour is with Brandy Clark and Tanya, which is amazing. Brandy and I wrote a song on my first record and she’s inspiring to me. It’s amazing for me to be in the company of these legends! It’s inspiring to be around women who are making an impact, and writing their own songs, and getting out there and having their own voices.

What do you hope people will learn about you when they hear this new album?

There are songs on this record like “Haven’t Even Kissed Me Yet” that are so intimate. It’s one of those things where you sit down and write it, and you think, “This song may only mean something into me.” Then you play it out and even something that personal can connect with people. People really do connect with honesty and they imprint their own experience on top of the song.

What is that experience like for you to be on stage, and to see the audience enjoying your song?

Yeah, it’s cool! You know, I still get nervous. I still have trouble looking at people sometimes because I don’t want to get thrown off. I’m very sensitive to all that energy.

But I always go out after the show and I really enjoy talking to people, despite being an introvert. I find it nice to be able to have a personal, one-on-one connection and talk to people and see what they got out of the show. That to me is the really fun part.