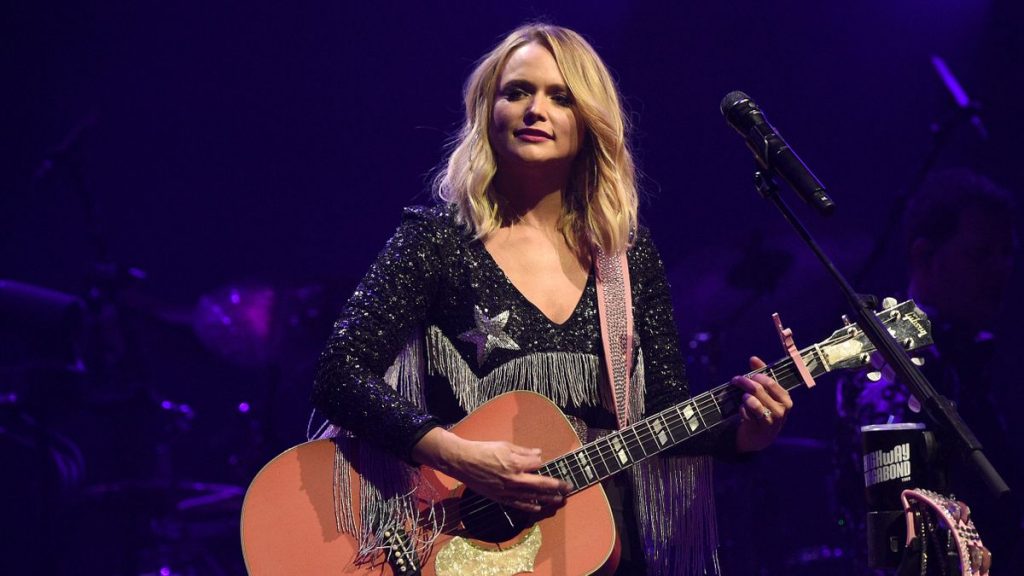 An Hour of Brutal Honesty with Miranda Lambert

At this year’s Country Radio Seminar, Miranda Lambert sat down for an hour-long conversation (and a little bit of music) on Wednesday (Feb. 19) to talk about everything from getting her gritty start to what her mindset is right now, 17 years into her official music career.

And she started the conversation with a glass of wine in her hand, and talked about her very first starts.

“I guess I was about 10, and I sang in the third grade talent show — I sang Holly Dunn’s ’Daddy’s Hands,’ and my dad played guitar,” Lambert said of when she first knew she could sing. “But I was really shy, and terrified of crowds. Like I wouldn’t even order at McDonald’s for myself. I just didn’t really pursue it until I was about 16. I got my first guitar when I was 14, but it wasn’t my idea. It was my dad’s idea. I was like, ’I’m busy being a cheerleader.’”

She did, however, write her first song when she was 14. “Get this. It was about a girl named Mandy Lee and she was moving to Nashville to be a country singer,” she laughed.

Her small town of Lindale, Texas was all about football, she said, and while she was in drama club and had roles in the musicals, she longed for a proper choir. “I thought, ’What am I gonna do? I’m not good at anything else.” So my mom and I started a petition to get a choir. The first week, 55 kids signed up. That was pretty telling. And they still have a choir 20 years later. At the time, I was like, ’Where do I fit in anywhere? There’s got to be other kids like me.’”

Then came the True Value Country Showdown. “I sang in a youth group, so after church one day, I stayed to make a secular tape. Singing my secular songs! I used the church sound system to record a demo on a cassette tape, and put it in an envelope and mailed it in. And I got a call. I was in the contest, I came in third. But I was singing on a stage in bar. The Reo Palm Isle. And I was, ’Ohhhhh, this is what it is. There’s smoke. And neon,’” she said. “I think that was the point when I got addicted right away. And I ended up getting a house gig at that bar when I turned 17. I was like, ’Am I old enough to be in here?’ I had the gig for four months, three nights a week, I made $200. But it’s where I started to get my chops.

“It was the only thing that ever came naturally.”

“I played bars for two and a half years opening for all Texas acts. My mom drove me around to all the stations in Texas in her Expedition with bologna sandwiches. Super Loretta Lynn-style. Like for real. I was like, ’Hey I have a guitar. Can I sing?’ Some said no, some said yes.”

With her mom’s continued encouragement, Lambert auditioned for Nashville Star. “I went to Dallas, and I sucked real bad. I didn’t even make the top 25. I sang “Still the One” by Shania Twain, which I love. I didn’t execute, because I didn’t try. My mom was like, ’You didn’t give anything. I’ve given you everything. I’ve driven all over this state. That’s not fair to me. You’re doing it again in Houston.’”

Lambert went in with a different attitude in Houston, sang Patsy Cline’s “Crazy,” and came in just close enough to the top to get noticed by Nashville. She said she looked at the show like her college. Navigating her way from DFW to BNA and then to living in a house with ten strangers.

“All the grit from playing in bars, all the moments where nobody was listening, and people were fighting in front of the stage, requesting waltzes. That was what set me on this dream,” she said. “I thought (Nashville) was gonna try to jüj my image, which I was terrified of because I was a little rough around the edges.”

The result of all that grit (and no jüj) was 2005’s Kerosene. And then six albums later, Lambert made Wildcard. “I went into it with the same hunger and mentality I made Kerosene with,” she admitted.

And now, at 36, Lambert has 33 Academy of Country Music awards to her name, a roomful of awards, and a magic porch at her house in Nashville’s Green Hills neighborhood where songs almost write themselves.

She ended the hour by picking up her guitar and singing two songs off her latest album Wildcard, “Dark Bars”and “How Dare You Love.”

Stay tuned tomorrow for the second half of the conversation with Lambert.