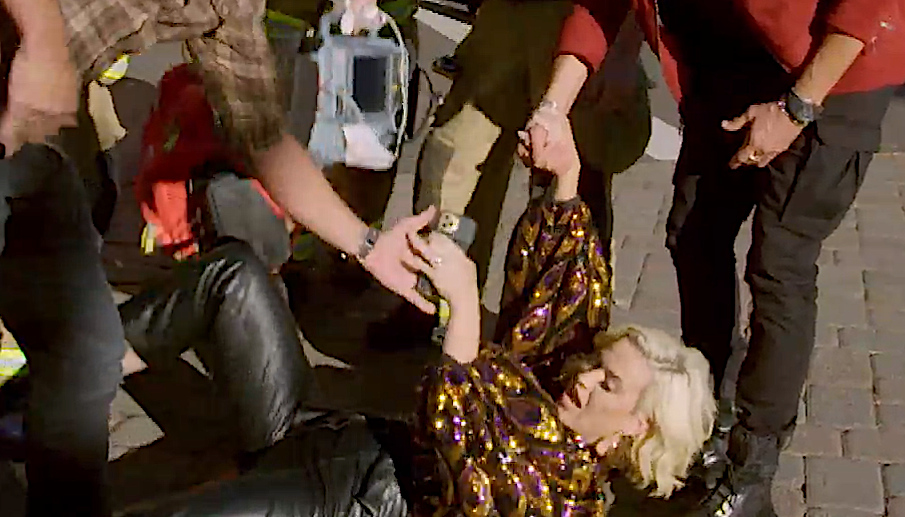 
There have been explosive moments and leaked auditions on American Idol over the past 18 seasons, but both almost literally occurred on Sunday’s episode, when a gas leak caused the cast, crew, and contestants to flee the scene.

“Do you guys smell gas? It’s pretty intense,” a wary Katy Perry called out. “I have a slight headache from it. Oh, it’s bad. It’s really bad.”

“We’re getting heavy propane,” Luke Bryan told producers. “This is not a joke. There really is a gas leak.”

Alarms went off and the set was promptly evacuated, where outside a typically dramatic Katy swooned and fell to the pavement, moaning, “I’m not feeling good.” But she seemed to recover rather quickly, and may have just been trying to attract the attention of the hunky men in uniform who had swooped in to save the day. The best moment was when the firemen finally gave the all-clear and everyone celebrated with a group singalong of judge Lionel Richie’s “All Night Long,” which was good enough to earn all of the firefighters golden tickets.

Maybe it was the guy who sang right before this emergency situation, 28-year-old Jovin Webb, that had caused the audition room to get so fiery. My favorite contestant of Season 18 so far, he infused his “Whipping Post” with so much soul, grit, and the pain stemming from the recent, sudden death of his “biggest fan,” his beloved mother. What a phenomenal performance this was; if there was ever any evidence that Idol producers did the right thing years ago when they elevated the show’s age limit from 25 to 28, it was this, because Jovin’s life experience is what made this audition so special.

“You officially brought the barbecue sauce to American Idol. …BB King once told me it’s hard to sing the blues from the backseat of a limousine. In this case, you’re coming from the ground floor. That was so real,” said Lionel. Luke ran up to shake Jovin’s hand and raved, “I could sit and drink a lot of bourbon listening to that voice. I heard your whole life in that performance.” Wow, BBQ and bourbon? I think this budding superstar has some endorsement deals in his future.

Jovin wasn’t the only great auditioner this week. Let’s see who else is going through to Hollywood.

Last year, Cyniah went viral with a family living room performance of “Change Me Oh God,” which racked up more than 4 million views. It’s easy to see why. With a mature but quirky rasp that reminded me of Season 3’s Fantasia and a sweet girlishness that reminded me of Season 6’s Jordin Sparks, she delivered a polished yet effortless performance of Calum Scott’s ballad that actually had a dreamy-eyed Lionel comparing her to a young Whitney Houston.

Kay was confident… but maybe too confident. Though I appreciated her sass and energy on this Duffy cover, as did Katy, she was the opposite of effortless. Everything about her audition was fussy and try-hard. And she was pitchy, too. The judges were about to turn her away, but instead, for the first time in Idol history, they decided to make a contestant sing for her supper (or, more specifically, for a golden ticket). Kay was more in her element on the street, playing to a raucous crowd of lookie-loos, and she sold it. This bodes well for Kay’s ability to perform under pressure (a.k.a., during Hollywood Week or on live television), but I still don’t know if she has the pipes to compete — or the humility and likability to win votes.

Kyle recently became of the few male cheerleaders in the NFL (he shakes his history-making pom-poms for the Philadelphia Eagles), a feat that gave him the confidence to try out for Idol with all of his fellow squad members in tow, despite not having ever sung in public before. I thought he might be a joke contestant, but his Shawn Mendes cover was soulful and smooth, very Daniel Merriweather-esque, especially when he took Katy’s advice to bring up the key. “That’s the spot, right there,” Luke observed, as Kyle got into his husky zone. I am cheering for Kyle now.

This spazzy Idol stan got a lot of screentime last season for her belching, birdcalls, inability to remember her own name, and box poses, but not so much for her singing. But now that she’s won a chance to re-audition via a fan-voted ABC contest, this season she is back as “Margie 2.0” — calmer, wiser, and, most importantly, vocally improved. Maybe her boyfriend Jonny West (more on him in a bit), who played piano for her, provided a comforting presence. “I like the person you are now,” remarked Lionel. “Pretty much every time you sang for this last year, you hit bad notes. You didn’t hit one bad note this time,” said Luke. Surprisingly, Katy, who was Margie’s biggest fan in Season 17, wasn’t impressed, but Luke and Lionel put her through to Hollywood. We will see how long she lasts there. She might not last as long as Jonny.

Margie’s possibly better half was wildly entertaining on this original piano romp, a funky blue-eyed soulman who somehow pulled off a Jason Mrazzy, slam-poetic rap breakdown without embarrassing himself. (I’d advise Jonny to do that sparingly going forward, lest it become a gimmick, but it worked this time.) Katy called Jonny “so pro” and told him, “I get why [Margie is] so obsessed. …I don’t want this for you and your relationship, but I think you could go further than Margie.” Lionel said Jonny has “everything American Idol needs,” and Luke even said Jonny veered “really close to the Alejandro Aranda lane,” which we all know is high praise in Idol-land. Looks the judges really have found a boy.

Sarah showed up to her audition with her two moms, her biological (sperm-donor) dad, and 10 of her 26 sperm-donor half-siblings. A true modern-day American family! They should all be proud of her. Sarah’s voice was sexy and sultry, warm and inviting — and in fact was as its best in her lower register, which can be so tricky for many other singers. Luke was “blown away,” and Lionel told her, “You have a low end that will compel me to listen to every song you’re going to sing.”

This piano prodigy’s original song gave me total Jena Irene vibes. Katy, who marched right up to Julian afterwards and gave her a huge congratulatory hug, said, “You are as good as Catie Turner, as Alejandro Aranda. … I think you’re top five.” Luke said, “That was big-time… really, really classic.” Lionel raved, “You gave us your whole authentic self.” I thought the song itself was just OK, so I’m eager to see Julia dig into some other material, but the raw talent is definitely there.

Hannah showed up with her husband and Treble Soul bandmate, Curt Jones, who decently auditioned with Travis Tritt’s “Help Me Hold On” but failed to secure a golden ticket. Instead, Curt’s job was to be supportive and help Hannah hold on, as she poured her whole heart and trebling soul into her original country ballad — which was about her post-pregnancy addiction to hydrocodone and how it almost destroyed her marriage. Her audition in fact took place on the one-year anniversary of her sobriety, and it was incredibly moving. “There’s a pain that you can feel, and people resonate with it,” Katy said. So it looks like both Hannah and Curt will be going through to Hollywood — Curt as Hannah’s support system, and Hannah as a potential new star with a new lease on life.