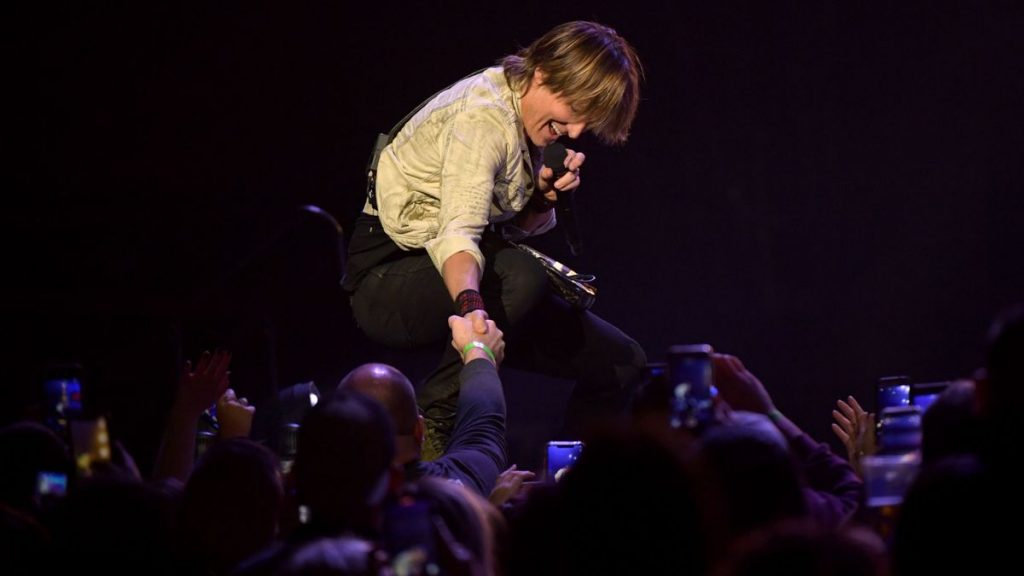 All the Influences at All for the Hall

Back in 2009, Keith Urban had an epiphany of sorts. If he threw a concert and invited everyone he knew, he knew he could do some good. So on October 13, 2009, he took the stage at Nashville’s Sommet Center with an all-star guest list and 14,000 fans. And he gave the money he raised to the Country Music Hall of Fame and Museum.

Fast forward to Monday night (Feb. 10), and Urban’s All for the Hall shows have since raised millions for the Hall of Fame. “To date, the All for the Hall concerts have raised $4 million for these programs,” Urban told the sold-out crowd at this year’s show at Nashville’s Bridgestone Arena. “So from all of us at the Hall, thank all of you for doing that.”

And this time — Urban’s seventh benefit show for the museum’s education programs — he filled the Bridgestone Arena with fans and country artists and billed it the All for the Hall Under the Influence show.

For two and a half hours, Urban and his artist friends each had the chance to play a song of their own, and then one from one of their musical influences. Urban was first up with his cover of a cover. He chose the 1977 cover of a 1963 Roy Orbison tune. And when he was done, he stayed on stage all night long, backing each artist on guitar and vocals.

“I chose a theme this year which I do every year, and I chose Under the Influence. Which gave us a chance to pick a song by somebody that has been an influence on us in some way. So tonight, you guys are going to get to hear a song by the artist that you know,” he told the crowd, “and they they’re gonna tell you a little bit about a song they wanna play that influenced them in some way.

“For me, growing up listening to a lot of records that my dad had — Charley Pride, Johnny Cash, Don Williams, Dolly Parton, Glen Campbell — all American country records. But on the radio at the time was a lot of top 40. So I was listening to top 40 and I’m listening to country, and it’s all fusing together. And the artists that I was loving were people like Ronnie Milsap and Dr. Hook. And of course, Linda Ronstadt. And Linda is interesting because — if you haven’t seen the documentary about her, it is amazing — and so I decided I wanted to do a song from her. You might know it as a Roy Orbison song, but for me the definitive version is always gonna be Linda’s.”

“I grew up idolizing the ladies of the 90s. People like Faith (Hill), Trisha (Yearwood), Patty Loveless and this next lady,” Pearce said. “I expect every single one of you to sing every single word with me. Are you ready? We gonna get sassy.”

Morgan Wallen
The Eagles’ “Take It Easy” from 1972

“I’ve loved music ever since I was a little kid, and I had great parents who cultivated that. I know we’re not all that lucky, so it’s cool to be able to be here and give back to people who love music from a young age. Some of the music I grew up listening to at a young age was with me and my dad just riding around in his truck,” Wallen shared. “He’s a big country rock fan. And I grew up listening to a lot of bluegrass, a lot of Christian music and a lot of classic rock and roll, and I feel like this song I’m gonna sing tonight embodies a little bit of everything.”

“This is one that I would drive around jammin’ out with my dad to. It was one of his all-time favorite songs. I love this whole record. I love how this song makes me feel,” Townes said. “If you feel like singing at the top of your lungs, please join me.”

“I have a song that, man, when I was back in high school in Oklahoma this song was on the radio. And I always thought it was cool. I’m a big Alan Jackson fan, so I’m gonna do a country song from Alan Jackson,” Shelton said as he introduced “Dallas.”

“Okay. Who here likes John Denver? I do, too,” Andress said. “He was a big influence for me growing up because he was the first artist I’d listened to that I was like, ’Oh, I love this music and I love how country it is.’ And ironically, it was controversial. People were like, ’Oh well, he’s not country.’ And to me, if you can write a good story and put it in a song, you’re pretty country to me.”

After they finished the song, T.J. Osborne remarked, “It felt good to play an old country song and (have) everyone sing along. We chose that song because John and I grew up listening to Merle Haggard, and I love Merle not only because he’s a great singer but also an incredible songwriter and just an all-around badass.”

“This next song was one that inspired me growing up,” she said. “I loved me some soul music.”

“I’d like to play one of my favorite songs. It’s probably one of the biggest influences in my life. I used to ride around in the car with my dad and listen to Willie Nelson,” Stapleton said.

“I’ve had a lot of heroes in my day, so many it would probably take up the whole show. So I picked four of my very favorites,” Tucker said.

“This next song is one of my favorites of all time. And the last song of the night. Thank you, Keith, for having me,” Combs said. “Thank you guys for spending your night with us. I hope you all know this one, and if you do, I know we’d love to hear you sing along.” Urban introduced Combs, who just moved to Nashville five years ago, as someone with an amazing voice, incredible songwriter and a good dude. “This guy is all heart,” he said.