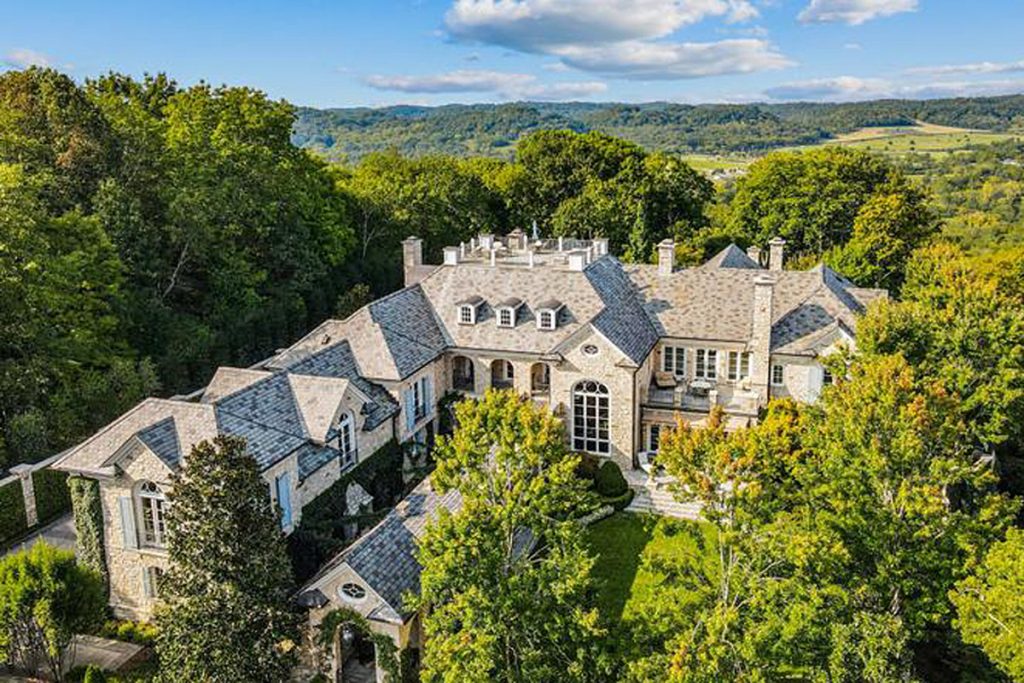 
Alan Jackson and his wife, Denise, are selling their jaw-dropping hilltop estate outside of Nashville for a whopping $23 million, and pictures reveal a stunning property that most of us can only dream about.

The country music icon has listed his 5-bedroom, 8-bathroom, 22,012-square-foot mansion in the affluent rural Nashville suburb of Franklin, Tenn., which breaks down to an estimated payment of $100,594 each month, according to Zillow.

The official listing with French King Fine Properties in Nashville describes the estate as a “monumental stone residence.” Architect Ron Farris designed the traditional, very formal home, which also includes 4 half-bathrooms. The bedrooms are lavish suites, while the formal dining and living areas are impeccably finished with arched doorways, oversized windows and elaborate woodwork that give the vast house an even more imposing feel. There is also a bar, a media room and multiple fireplaces both in and outdoors.

The exterior of the home is every bit as spectacular, featuring a pool with a pool house, a loggia, impeccably manicured and terraced lawns, an outdoor kitchen, a firepit and climate-controlled garages that can hold up to 15 cars.

The house sits on a hilltop on 4.29 acres that offer sweeping views of the surrounding countryside, surrounded by 120 acres of green space. The gated property sits inside the private Laurelbrooke community, which has its own separate gates that are guarded 24/7.

Jackson is no stranger to lavish estates. He and Denise previously lived in a massive 18,622-square-foot antebellum mansion called Sweetbriar in Franklin, which Jackson modeled after Tara in Gone With the Wind when he had it custom-built. They sold that residence for $28 million in 2010.

The couple also owned a stunning lakefront mansion in their native Georgia, which they listed for sale for $6.4 million in 2017.

Scroll through below to see inside Alan Jackson’s stunning hilltop estate: