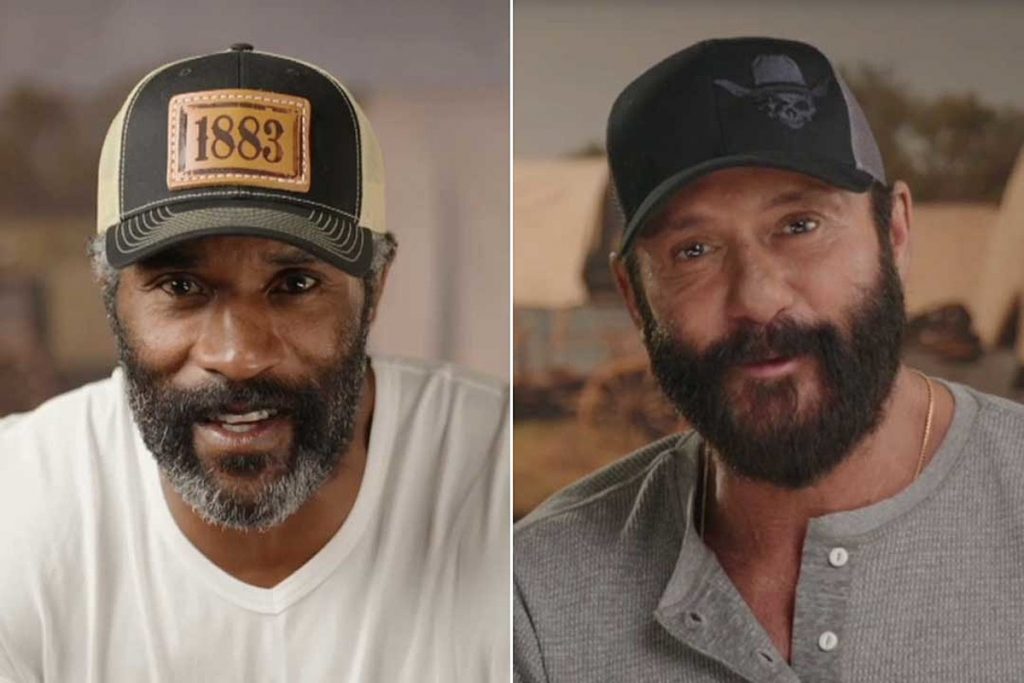 
1883 star LaMonica Garrett keeps himself in great shape, but in a new interview, he admits that even he can’t keep up with his co-star, Tim McGraw, in the gym. Speaking to Taste of Country and other media outlets prior to the show’s premiere in December, Garrett says that while he and McGraw both work out avidly to stay fit for their physically demanding roles, McGraw is always willing to push it one step further.

1883 is a prequel to Yellowstone, starring McGraw and Faith Hill as James and Margaret Dutton, the great-great-grandparents of Yellowstone‘s John Dutton (Kevin Costner). The show follows the early Dutton clan as they undertake an arduous wagon train journey West from Texas to Montana, where they wind up founding the Yellowstone Dutton Ranch that serves as the setting for the Paramount Network hit.

Garrett plays the role of Thomas, a Pinkerton agent who is traveling with the wagon train. He says working out helps him deal with the physical demands of the role, which entails long hours on a horse in the sun, working with his hands, eating a basic frontier-style diet and dealing with adverse weather in the outdoor shooting locales. He and McGraw have been workout buddies since the beginning of shooting.

“I get up every morning before work and I hit the weights, I stretch out. And Tim as well; you know, we have this competition going between me and him this whole shoot, who gets in the gym earlier,” Garrett shares.

It’s a competition in which McGraw seems to have the edge.

“If you’ve got a 5 o’clock call time, Tim’s in there at 3,” Garrett marvels. “I draw the line somewhere. But it just helps anchor me, to prepare me for what the day brings. Because you’re sitting on a horse for four or five hours. The inside of your legs are done. Your butt is done, your hamstrings are done. You get off, you’re walking off and your legs are bowed out. I got off my horse the other day, and the set medic came over to me and said, ‘Hey, are you okay, are you injured?’ I’m like, “Naw, man, I’ve just been on this horse for four hours,'” he relates with a laugh.

“I’m sort of a gym rat,” McGraw acknowledges with a chuckle in a separate conversation during the same press event. “I have to be in the gym every morning. The toughest part is being up at 3 in the morning every morning in order to make your call times. That’s probably the hardest part of it, is getting up at 3, getting your workouts in. Because there’s been a couple of days that I didn’t do that, and the energy is not the same on set.”

McGraw uses that time to not only prepare physically, but also mentally.

“My workouts are sort of like my meditation in a lot of ways,” he reflects. “That’s the time when I go over my lines in my head, and I prepare for the day and try to be ready for what’s going on.”

New episodes of 1883 stream every Sunday via Paramount+.

Stay tuned to Taste of Country as we provide ongoing coverage of both Yellowstone and 1883, including episode analysis, news on the shows, cast interviews and more. As part of our comprehensive coverage, check out the Dutton Rules podcast on Apple Podcasts and Spotify.

Subscribe to the Paramount+ streaming service to make sure you don’t miss out on future episodes of 1883.

A historic estate in rural Tennessee that previously belonged to Tim McGraw and Faith Hill is on the market again. Online listing are asking $9,995,000 for the Samual S. Morton house, which dates back to 1850, as well as the surrounding 135 acres of land.

The 3-bedroom, 3.5-bathroom, 3,298-square-foot main residence has been fully updated, featuring hardwood floors, multiple fireplaces, a long screened-in porch on the back of the house, two sweeping staircases and a kitchen with a farm sink. The listing also boasts a long stretch of frontage on Murfree’s Fork Creek, a spring-fed, 4.3-acre stocked pond and a historic 13-stall barn.